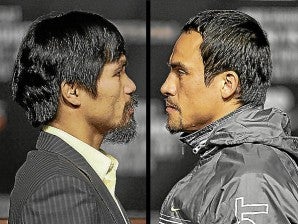 EXTRA FIRE. World pound-for-pound king Manny Pacquiao (left) carries extra fire into Saturday’s fight (Sunday in Manila) in Las Vegas with Mexico’s Juan Manuel Marquez (right) who has been taunting his rival that he won both prior fights. The taunt has inspired “Pacman” to train like never before for the world welterweight championship fight at the MGM Grand Garden Arena in Las Vegas. AFP; FRANCIS OCHOA

MANILA, Philippines—If not zero, the Philippine National Police believes that there will be another significant decrease in the crime rate in the country on Sunday when Congressman Manny “PacMan” Pacquiao goes against Juan Manuel Marquez for the fourth time in their storied boxing careers in Las Vegas.

Chief Superintendent Generoso Cerbo said Friday this was based on past experiences where there was either zero-crime rate or a “dramatic” drop in figures every time Pacquiao would fight.

“. . . sa karanasan natin sa mga prevous fights, medyo lahat ay nagsasaya, and that includes yung mga [In our experience form the previous fights, everybody is happy and that includes] criminal elements,” Cerbo said, adding that he hopes for the same on Sunday.

His prediction of the fight? Cerbo said he would think that the fight would last eight rounds, in favour, of course, of the Saranggani congressman via knockout.

He said the viewing would be made free for police officers given that they present a valid ID.

The live viewing at the multi-purpose hall will be open for officers at 8 a.m. until the fight’s main event. The venue can hold up to 3,000 people.

But Cerbo assured the public that the PNP would be vigilant against crime during the bout because “our mandate is to preserve peace and order”.

“ . . . yung aming mandate na mag maintain mag-preserve ng peace and order ay tuloy-tuloy given yung laban ni Pacquiao sa Linggo,” he said, adding that there would be replays for those who won’t be able to watch it live. Jamie Marie Elona