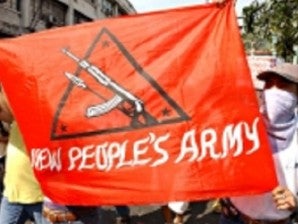 The rebels simultaneously attacked the military base of Alpha Company of the Army’s 78th Infantry Battalion in Antipolo village, Albuera town past 7p.m. Thursday, and assaulted another team of soldiers from the Army’s 19th Infantry Battalion an hour later in Rubas village, Jaro town, which resulted to the death of two soldiers, Captain Dranreb Canto of the 802nd Brigade said.

The military declined to release the names of the victims pending notification of their families.

A civilian was also injured and was brought to a hospital in Ormoc City for treatment.

“This is another desperate act of the NPA to disrupt our efforts in bringing peace and development that will benefit our less fortunate brothers and sisters in the area”, said Colonel Rafael C. Valencia, the Brigade Commander of 802nd Infantry Brigade based in Camp Downes,

On November 30, one soldier was killed and two others were wounded when elements from the 78th Infantry Battalion were ambushed by about 10 communist rebels in the village of San Pedro, Albuera, Leyte. The soldiers were on their way back to their headquarters from

peace and development activities when waylaid.