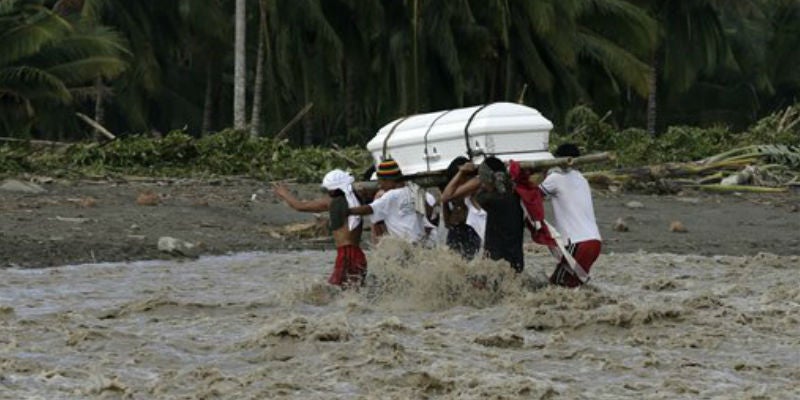 Relatives cross a river to bury their loved one, who died in a flash flood caused by Typhoon Bopha, Thursday, Dec. 6, 2012, in New Bataan township, Compostela Valley in southern Philippines. The powerful typhoon that washed away emergency shelters, a military camp and possibly entire families in the southern Philippines has killed hundreds of people with nearly 400 missing, authorities said Thursday. AP Photo/Bullit Marquez

NEW BATAAN, Philippines— The Philippine government’s geological hazard maps show why this farming community was largely washed away by a strong typhoon: “highly susceptible to flooding and landslides.” That didn’t stop some villagers from rebuilding even with bodies still lying under the mud.

Most of the about 420 people confirmed dead from Typhoon Pablo (International name: Bopha) were killed in the steep valley that includes New Bataan, a town crisscrossed by rivers and cleared from lush hillsides by banana, coconut, cocoa and mango farmers in 1968. Flooding was so widespread here that places people thought were safe, including two emergency shelters, became among the deadliest.

In the impoverished Philippines, the jobless risk life and limb to feed their families and the government can do little beyond warning of the danger.

“It’s not only an environmental issue, it’s also a poverty issue,” said Environment Secretary Ramon Paje. “The people would say, ‘We are better off here. At least we have food to eat or money to buy food, even if it is risky.’

“But somehow we would like to protect their lives and if possible give them other sources of livelihood so that we can take them out of these permanent danger zones,” Paje said.

Nearly 400 people were missing Friday after the typhoon struck the southern Philippines this week.

After a night of pounding rain, floodwaters started rising around 4 a.m. Tuesday, trapping farmer Joseph Requinto, his wife and two young children in their house near a creek.

“After that I saw some people being swept away,” he told The Associated Press. He climbed up a hill, carrying his children, and the family found shelter behind boulders that shielded them from coconut trees rolling down the hill.

“The water was as high as a coconut tree,” he said. “All the bamboo trees, even the big ones, were all mowed down.”

Interior Secretary Mar Roxas saw New Bataan covered in 15 centimeters (6 inches) of mud. He was told by townspeople that a pond or a small lake atop the mountain collapsed, causing torrents of water to rampage like a waterfall.

“There is hardly any structure that is undamaged in New Bataan town,” he said. “Entire families may have been washed away.”

New Bataan residents led reporters from Manila’s GMA Television to a mound of felled trees that were swept down from the hills. At least five bodies were jammed beneath the rubble, with no sign that anyone had attempted to retrieve them. It was uncertain if there were more bodies at the site.

Dozens of people stared blankly at their devastated town as they waited at a government information center, hoping for word of missing relative. Authorities planned to display about 80 newly washed bodies in coffins at a Roman Catholic church Friday, hoping relatives will identify them.

Authorities said about 215 people died in Compostela Valley and more than 151 in nearby Davao Oriental province, with the rest in other central and southern provinces. The typhoon, which hit the region with winds of 175 kph (109 mph), was weakening and expected to dissipate in the South China Sea by the weekend.

The 20 or so tropical storms that hit the Philippines each year strike its northern and central regions more often than the southern provinces pummeled by Bopha, but still, deadly floods are common on resource-rich Mindanao Island. On another part of the island last December, 1,200 people died when a powerful storm overflowed rivers. Then and now, raging flash floods, logs and large rocks carried people to their deaths.

The Bureau of Mines and Geosciences had issued warnings before the typhoon to people living in flood-prone areas, but in the Compostela Valley, nearly every area is flood-prone.

Bureau Director Leo Jasareno said about 80 percent of the valley is a danger zone due to a combination of factors, including the mountains and rivers, as well as logging that has stripped hills of trees that minimize landslides and absorb rainwater. Logging has been banned since last year’s fatal flooding, but it continues illegally.

Nearly 80 villages and soldiers died in the New Bataan village of Andap when a flash flood swamped the two emergency shelters and a military camp. Jasareno said Andap had been an especially dangerous place to be.

“There is the Mayo River there. It’s a natural channel way of the water from the upstream,” he said. “The water has no other path but Andap village.”

People stay because the land is rich in natural resources, including timber and gold, which is dug by small-scale miners.

“It’s not possible to have no houses there because even the town center was hit. You mean to say the whole town will be abandoned?” Uy told the AP. He doubted the basis for classifying the area as dangerous and said he had urged the central government to review the hazard maps.

Uy said previous floods had been far less damaging, and had never threatened the places where the doomed emergency centers had been set up: the village hall, a health center, a covered court.

“We thought they would be safe there, but the volume of water was so huge,” he said.

The deaths came despite efforts by President Benigno Aquino III’s government to force residents out of high-risk communities as the typhoon approached. Vice President Jejomar Binay directed local executives, police and military officials not to allow those displaced to return to their homes in areas classified as danger zones. However, it wasn’t clear how quickly and where substitute homes would be built.

On Thursday, residents armed with hammers began to repair devastated homes and wash their muddy belongings, taking advantage of the sunny weather.

They stopped when a rescuer in orange overalls blew his whistle. He had seen a hand sticking out of a muddy heap of logs, rocks and debris.

Soldiers and volunteers converged on the pile with shovels and crowbars. They pulled four bodies from the muck, including two children.