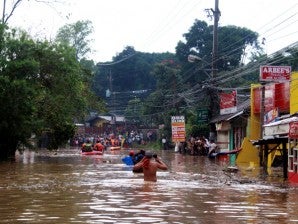 MANILA, Philippines — Environment and natural resources officials attributed on Thursday the high number of casualties in several Compostela Valley towns to unheeded government warnings on typhoon Pablo, emphasizing that illegal logging and illegal mining were to blame for the devastation.

“The number of casualties would have been reduced or even avoided if they listened to the advisory,” Mining and Geosciences Bureau (MGB) director Leo Jasareno told the Philippine Daily Inquirer, referring to residents of Barangays (villages) Andap and Poblacion in New Bataan town of the Province.

Jasareno said that two days before typhoon Pablo was anticipated to hit the Mindanao area, the DENR issued advisories to the local government units in flashflood-prone and landslide-prone areas, which were on the path of the typhoon.

Barangays Andap and Poblacion, he said, were particularly mentioned in the advisory as a flashflood-prone area where mass evacuation of residents was strongly recommended.

“If the advisory was heeded, there would have been no deaths,” Jasareno told the Philippine Daily Inquirer.

He observed that the provinces of Misamis and Surigao as well as Cagayan de Oro City had apparently followed the government advisory and had a much less casualties.

The DENR advisories had been based on the geo-hazard map plotted by the agency 48 hours before typhoon Pablo hit. It indicated flood-prone and flashflood-prone areas covering 3,000 barangays (villages), most of them in Compostela Valley particularly in New Bataan town.

Landslides in mountainous areas of the province, he said, were worsened by illegal miners.

“I think this is one instance where the government was most prepared,” Environment and Natural Resources secretary Ramon Paje told the Philippine Daily Inquirer and added, “But giving warnings is one thing and heeding them is really another.”

“This (Pablo’s devastation) is the effect of illegal logging and illegal mining,” he said.

Paje pointed out that eight days before Pablo was anticipated to enter the Philippine area of responsibility and was still typhoon Bopha, the state weather bureau had been giving out advisories. “Four days before it entered the PAR, Pagasa was already defining the typhoon’s path and 72 hours before landfall, President Aquino was presiding over a meeting in Malacañang for the preparations and making public announcements at the same time on what to expect on typhoon Pablo.” (PAGASA stands for the Philippine Atmospherics, Geophysical and Astronomical Services Administration.)

The DENR secretary told the Philippine Daily Inquirer that the geo-hazard map was plotted and advisories were sent out to landslide-prone and flashflood prone areas anticipated to fall within the 600-kilometer radius of the typhoon.

“I am sure the advisories were acted on by the local government units but they were maybe difficult to believe for people whose area is rarely hit by tropical cyclones. Two days before the typhoon, the sun was still shining which could have made it hard for residents there to believe that a typhoon was coming,” he said.

According to Paje, out of the 31 identified hotspots of the activity, 80 percent are in the Davao and Caraga regions, including Compostela Valley, which were hardest hit by the typhoon.

Anti-illegal logging operations in Mindanao have been reclassified as active military operations and the Department of National Defense as well as the Armed Forces have been put at the forefront because of the presence of armed groups and insurgents in the region and the increasing number of civilian casualties in the enforcement of the total log ban.

The total log ban has been in effect since February last year when President Aquino ordered a halt to all logging operations in natural forests nationwide, virtually stopping timber extraction of about 300 million board feet a year.