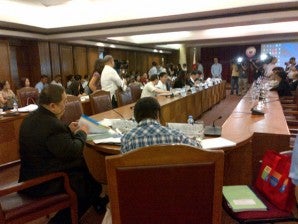 MANILA, Philippines — The bicameral conference committee on the sin tax bill on Thursday resumed its deliberations on the proposed measure and is expected to reconcile its disagreeing provisions.

Senator Pia Cayetano said that they were expected to take up rates and earmarking during the second meeting.

Suarez said that they would start trying to reconcile the disagreeing provisions of House Bill 5727 and Senate Bill 3299. The panel has earlier agreed to hike tax rates on alcohol and tobacco products every two years.

He said that they would push for their version which sought P31 billion in revenues, which is lower compared to the Senate’s P39 billion. The reason for this was to ensure that the law, once enacted, would not make it too attractive for smugglers.

Paul and Henares faced the bicameral conference committee on the sin tax reform measure at the Andaya Hall of the House of Representatives.

Read Next
Village captain in Pampanga killed
EDITORS' PICK
Editorial: Unusual haste
New Year, New Rediscoveries
Driving can be even more rewarding this New Year — here’s why
Tracing app pesters MRT commuters
Experience clearer calls nationwide with Smart VoLTE
Senate probe foils vaccine overpricing
MOST READ
Duterte to firms: No franchise until you settle your accounts with gov’t
7 copassengers of UK variant patient can’t be traced
Norway advises caution in use of Pfizer vaccine for the most frail
#DefendUP trends after DND scraps agreement with UP
Don't miss out on the latest news and information.