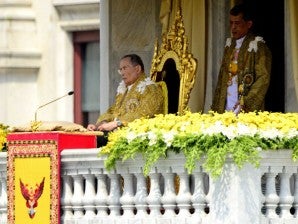 Thailand’s King Bhumibol Adulyadej, center, is accompanied by Crown Prince Vajiralongkorn after addressing well-wishers from the balcony at the Ananta Samakhom Throne Hall in Bangkok, Thailand, Wednesday during a ceremony celebrating his 85th birthday. AP

BANGKOK—Thailand’s revered king called for unity and stability in the divided nation Wednesday as huge crowds of adoring, flag-waving citizens packed Bangkok for a rare speech to mark his 85th birthday.

At least 200,000 people flooded the capital’s historic district, with aerial television images showing a sea of yellow as supporters of King Bhumibol Adulyadej dressed up in the color associated with his reign.

The king, who is seen as almost a demi-god by many in the politically-turbulent nation, told the crowd that the “goodwill” Thais had shown by attending the ceremony together “gives me the confidence that your kindness is key to bringing unity to the people and the nation”.

“If Thai people are virtuous, there is hope that no matter what situation the country finds itself in, it will be safe and retain its stability,” said the monarch in his short public address from the balcony at the Anantasamakom Throne Hall in front of the Royal Plaza.

Chants of “long live the king!” followed the royal motorcade as it made its way to and from the hospital where the king has lived for three years since suffering a respiratory illness in 2009.

Bhumibol, whose 66 years of service makes him the world’s longest reigning monarch, suffered a minor brain bleed in July, but has since made several official appearances including meeting Barack Obama during the US president’s visit to the country last month.

The monarch has no official political role but is seen as a unifying figure in a country that is frequently riven by political unrest, and his birthday is marked by country-wide celebrations, a public holiday and Thai Father’s Day.

Any discussion of the royal family is extremely sensitive in the kingdom, where the palace has been silent over the organization of an eventual succession.

Thailand is in the grip of a long-running political crisis pitting royalists against supporters of ousted premier Thaksin Shinawatra and the current government led by his sister Yingluck.

The bitter divisions have led to sometimes violent street rallies in recent years.

An anti-government protest last month — attended by members of the influential monarchist “Yellow Shirts” — was centred at Royal Plaza and saw clashes between police and demonstrators in the city.

Yingluck was among the dignitaries at the ceremony, as well as most key members of the royal family with the exception of Queen Sirikit.

Doctors treating the 80-year-old queen, who was diagnosed with a slight loss of blood flow to the brain after being taken ill in July, said she was still too weak to attend the event, according to a statement from the palace on Tuesday.