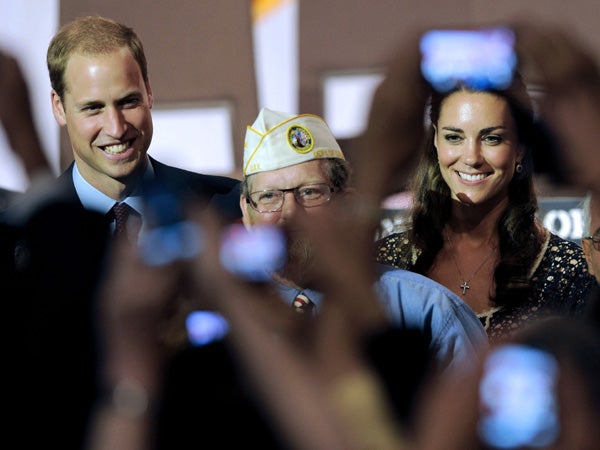 Prince William and wife Kate, the Duke and Duchess of Cambridge, are photographed by fans during a visit to the U. in Culver City, California in this July 2011 file photo. AP

WASHINGTON—News that the Duke and Duchess of Cambridge, aka Prince William and wife Kate, are having a baby lifted Americans’ fascination with the British royal family to new heights on Tuesday.

Mainstream media and showbiz websites alike fell over themselves with breathless updates on Kate Middleton’s morning sickness, Prince William’s hospital visits and what it all means for a monarchy America rejected in 1776.

“Kate’s pregnant,” trumpeted USA Today atop its front page, inviting readers to dive into three inside pages of “royally complete coverage” dedicated to such pressing concerns as what the baby’s name will be.

“It’s a reassuring symbol of continuity for the monarchy and, by extension, the United Kingdom itself,” it said, explaining how the “already stable Windsor dynasty” has now been “bolstered again” by the royal pregnancy.

The Wall Street Journal made “father in waiting” William its front-page photo, taking the edge off the lead story about the looming US fiscal cliff.

And The Washington Post declared “Britain is expecting” as it dedicated most of the front of its hip Style section to Kate, William and “what may very well turn out to be the world’s most famous baby.”

The Daily Beast went all out on its regularly updated Royalist blog, whose editor Tom Sykes patted himself on the back for having correctly guessed on November 30 that a royal pregnancy was being kept under wraps.

Among the clues, Sykes wrote at the time, were recent photos of Kate putting her hands on her tummy, sipping water in lieu of anything stronger at social events and growing bangs, as Americans call a hair fringe over the forehead.

Not to be outdone, The Huffington Post counted down “the nine most scrutinized uteri in recent history — other than Kate Middleton’s.” They included Jennifer Aniston, Beyonce and Japan’s Crown Princess Masako.

“I think there is an aspect (of the British monarchy) that fascinates Americans, the whole notion of people who live in castles and palaces,” Susan Kelley, who blogs about Kate’s fashion sense at WhatKateWore.com, told Agence France-Presse.

“In Kate and Will’s case, everyone love a fairy tale,” Kelley said. “For women especially, that drives a lot of the interest.”

Fascination with the British royals has been part of American celebrity culture since the storybook wedding of William’s parents Prince Charles and Princess Diana in 1981 and the subsequent collapse of their marriage.

When college sweethearts Kate and William tied the knot in April 2011, nearly 23 million Americans rolled out of bed early to watch the spectacle live on any one of 11 different television networks, according to Nielsen ratings.

By way of comparison, this past weekend, 16.5 million tuned in for the most popular US prime time drama, “NCIS,” and 10 million for the season finale of the zombie saga “Walking Dead.”

Alicia Carroll, whose Los Angeles-based EverythingRoyal.com specializes in British royal family memorabilia, said visits to the website — typically more than half a million hits a month — have doubled on news of Kate’s pregnancy.

“Everyone is thrilled,” Carroll said.

“I’ve received over 1,000 emails since yesterday (Monday) asking if I will be carrying royal baby commemoratives. She isn’t due for seven to eight months and people are putting in pre-orders for anything.”