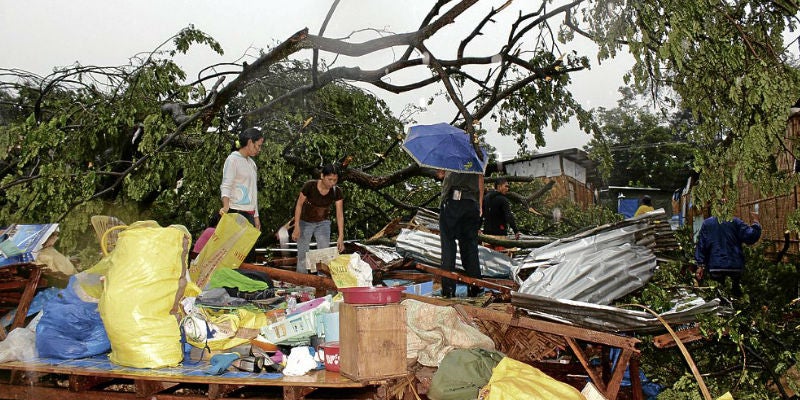 BLOWN AWAY Wrecked houses show the fury of Typhoon “Pablo” which ravaged a wide area of Mindanao. Officials said they did not expect that the floods, which reportedly swept people away, would be so deadly. CAI PANLILIO/ INQUIRER MINDANAO

Blown in the wind. Deaths in flash floods.

That’s what happened in areas in Mindanao raked by powerful Typhoon “Pablo” before dawn Tuesday.

Inquirer bureaus in Mindanao and Cebu, in reports attributed to local officials, and civil defense authorities put the initial death toll—mainly in flash floods—at 42 and another 24 unaccounted for. Most of the deaths were in New Bataan in Compostela Valley.

Benito Ramos, NDRRMC executive director, said each platoon had 33 soldiers. He said the command post of Charlie Company of the 66th Infantry Battalion at Barangay (village) Andap in New Bataan was reportedly washed away in a flash flood.

Contact with the platoons had not been established as of 4 p.m.

But Gen. Ariel Bernardo, commander of the 10th Infantry Division, told the Inquirer by phone that reports reaching him indicated only six soldiers were missing from the two platoons.

“It was totally unexpected,” Uy said. Flooding reached the barangay hall and the health center that were supposed to be on high ground.

“We never expected the waters to be that strong, the rescue team was only able to enter the area at 4:30 p.m.,” he said.

In the neighboring Compostela town, Provincial Board Member Neri Barte reported a woman and her two children were killed in a landslide.

Davao Oriental Gov. Corazon Malanyaon said four people were confirmed dead while 24 others were feared to have also been killed when Pablo hit the province at dawn on Tuesday.

“Of the 29, four have been confirmed. The rest, we still have to verify with reports coming from the ground,” Malanyaon told the Inquirer by phone.

“This is very depressing,” Malanyaon said.

She added that it was impossible for them to check on the reports yesterday because the roads were impassable due to landslides and fallen trees along the road leading to the towns.

Ramos said Olivarez was washed away along with his company commander, identified as Lieutenant Deazeta, after a flash flood hit their temporary command post at Barangay Andap at around 3 p.m. Deazeta was rescued but remains unconscious, Ramos said.

The soldiers’ first names were not immediately available.

Packing peak slightly weakened center winds of 160 kilometers per hour, gusting up to 195 kph, the typhoon that was internationally called “Bopha” struck before dawn Tuesday at Baganga town in Davao Oriental, according to the Philippine Atmospheric, Geophysical and Astronomical Services Administration (Pagasa).

With a diameter of 500 km, the typhoon swept across the midsection of Mindanao, slightly below the path Tropical Storm “Sendong” took a year ago, before veering west northwest toward the southern Visayas region. Sendong killed over 1,500 people.

As of 4 p.m., the eye of the typhoon was located 60 km southeast of Dumaguete City, Pagasa said. It was forecast to continue moving west northwest at 24 kph, maintaining its peak strength.

Port authorities in Dumaguete said a ferry with six crewmen was missing.

More than 3,430 passengers of 93 interisland vessels were stranded in 16 major sea ports, including those in Manila and parts of the Visayas and Mindanao,  the Philippine Coast Guard said.

In Davao Oriental, where Pablo made landfall, residents said the wind was so strong it sent coconut trees falling like logs cut by chainsaws.

Flordeliz Bantolinao, a teacher in Baganga, Davao Oriental, said a neighbor died in a house crushed by a coconut tree. Bantolinao said, by her estimate, 90 percent of houses in her village, Baculin, had either been destroyed or damaged.

Bantolinao said in a phone interview that in a 10-hectare plantation in her village, all the coconut trees were felled.

She said other villages in Baganga, especially in the town center, could have suffered the same fate, if not worse, but she had no way of knowing for sure because the roads leading to the villages and the center of town had been blocked by fallen trees.

Baganga, which faces the Pacific Ocean, is some 100 kilometers from the capital city of Mati.

Emmalyn Oliveros of the Davao Oriental civil defense office, said the extent of damage in the province could not be known immediately because of downed communications.

Oliveros confirmed the death of a 5-year-old child, Errol Lintuan, of Barangay Tubaon in Tarragona town. Lintuan was killed when a tree fell on his family’s house around 5 a.m. Tuesday.

In Cebu City, civil defense authorities said a 23-year-old man died after a coconut tree struck him as he was driving his motorcycle in Lazi town, Siquijor.

By 2 p.m. Tuesday, officials in Davao Oriental had moved 856 families to evacuation centers.

In Tarragona, roofs were torn off houses, according to Vivencio Anislag of the municipal office.

In Cagayan de Oro, the shrill sound of sirens warned residents of impending danger when the Cagayan River started to overflow its banks past 2 p.m. The sound of sirens combined with the pealing of church bells when water in the river rose 10 feet beyond its normal level.

While most residents had moved to evacuation centers by the time Pablo struck, many lingered by the riverbanks to watch the river’s water rise, prompting officials to send in policemen to forcibly move the kibitzers out of harm’s way.

The city information office said at least 25,000 people had been moved to 51 evacuation centers.

Unlike when Sendong struck,  residents of some places in the path of Pablo knew of the dangers that faced them, and were more willing to submit to preemptive evacuation, officials said.

In Agusan del Sur,  two persons were injured when a tree fell on their house in Bayugan City.

Thousands of residents in Tacloban City, Leyte and St. Bernard, Southern Leyte, were evacuated as a preemptive measure. In Bacolod City, residents in coastal areas have packed their belongings.

Tacloban City Mayor Alfred Romualdez said that 247 families, or about 1,214 persons from seven barangays  had been evacuated since Monday night  to the Tacloban City Convention Center.