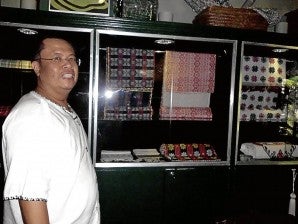 SAN FERNANDO CITY—A craft, a business and a social enterprise. Artist Al Valenciano has intertwined these endeavors in his “inabel” projects in the last 15 years, and one of the good outcomes he likes best is being able to help 65 men and women support their families from weaving the textiles that have been produced in the Ilocos region since the 16th century.

“They’re being fed better,” Valenciano says of the children of inabel makers he works with in communities in Paoay and Sarrat in Ilocos Norte, Santiago in Ilocos Sur, La Paz and Peñarrubia in Abra, and in Mountain Province.

The artisans weave the textiles right in their homes, using old wooden looms, the 44-year-old painter says at his Balay ni Atong (Home of Atong) beside the Pindangan Ruins in Barangay Parian in San Fernando City in La Union. “Atong” is the name he signs on his paintings.

Valenciano says he goes to the weavers to discuss designs, quality and size. “I don’t like putting them in a zoo [for viewing],” he says.

Wanting the weavers to be self-reliant, he taught them to save for capital.

“At first, I paid in cash. After three cycles [of production], I began paying in check for amounts like P30,000. But they told me they want cash. When I asked why, they said they did not have bank accounts and so I encouraged them to open bank accounts and they did. And that’s how they started saving money,” he says.

Several of the children or grandchildren of weavers are getting an education and one of them lives at the Balay ni Atong, which doubles as a study center for traditional weaving.

“It’s a dying industry,” he says, explaining that few are able to sustain it because for one, labor is paid at only P20 per yard.

Because he and his clusters of inabel makers are able to make fine textiles of various sizes with beautiful designs and lively colors on organic dyes, Valenciano is able to sell these well in the high-end market.

Their inabel production is limited to only 200 pieces each year. Cotton threads are imported from China, not anymore sourced from locally grown plants. The traditional weaving techniques, though, have not changed.

All these did not come easy, Valenciano says. “In the first years, many of the textiles were rejected because of the quality. Now we’re harvesting the results of 15 years of work,” he says.

Valenciano’s fascination and passion for inabel began when he started collecting these as a Grade 6 pupil. It must have been inspired, he says, by his mother Alegria who collected oriental ceramics.

“The fun in the hunt was the learning and the research,” Valenciano says.

He bought old inabel in various forms (blankets, table covers), some from the late 1800s to early 1900s, as he went around northern Luzon provinces. Talking to owners and makers taught him the history of the fabric.

“[The Ilocano epic] ‘Biag ni Lam-ang’ has many references to inabel. It was traded as clothes, blanket and sails for boats… An accomplished lady then was someone who wove inabel. The inabel is part of life of the Ilocanos,” he says.

His collections are at the study center, which he set up in 2000 as a tool for the design of the fabric.

Valenciano has begun selling to young people, tweaking the colors to fuchsia and aqua. “Some of them say that our inabel are more beautiful than the Belgian ones,” he says.

In two recent exhibits, he put a modern spin on the inabel, using these for lamp shades, furniture upholstery, wall tapestry and tableware.

He measures a work by his own yardsticks. “I like to own each piece. I won’t produce them if I don’t like them,” he says.