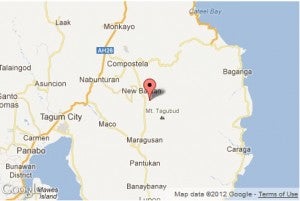 The victims drowned when torrents of water dumped by a powerful typhoon rushed down a mountain, engulfing the victims in Andap village in the municipality of New Bataan, Colonel Edgardo de Leon of the Eastern Mindanao Command told INQUIRER.net.

A soldier on standby for rescue operations at a military detachment in the village was among the fatalities, De Leon said.

Compostela Valley Governor Arturo Uy said rain from Typhoon “Pablo” accumulated atop a mountain and then burst down on Andap village early Tuesday.

Uy said the victims included villagers who had fled from their homes to a village hall, which was swamped by the flash flood. An army truck carrying soldiers and villagers also was washed away. With a report from Associated Press