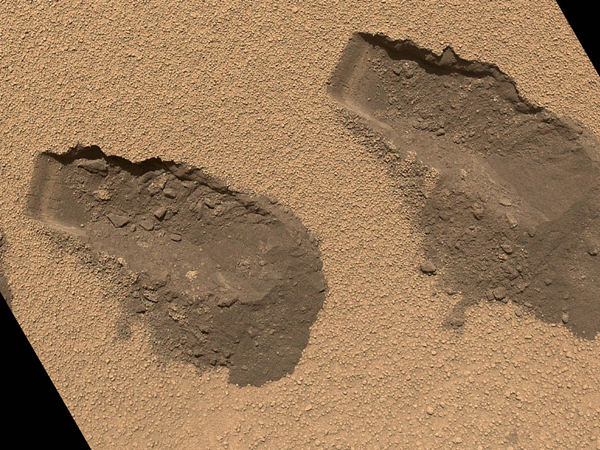 This picture provided by NASA on December 3, 2012 shows a view of the third (L) and fourth (R) trenches made by the 1.6-inch-wide (4cm) scoop on NASA’s Mars rover Curiosity in October 2012. The image was acquired by the Mars Hand Lens Imager (MAHLI) on October 31, 2012 and shows some of the details regarding the properties of the “Rocknest” wind drift sand. The upper surface of the drift is covered by coarse sand grains approximately 0.02 to 0.06 inches (0.5 to 1.5 millimeters) in size. These coarse grains are mantled with fine dust, giving the drift surface a light brownish red color. The coarse sand is somewhat cemented to form a thin crust about 0.2 inches (0.5 centimeters) thick. Evidence for the crusting is seen by the presence of angular clods in and around the troughs and in the sharp, jagged indentations and overhangs on one wall of each trench (the walls closest to the top of this figure). Beneath the crust surface, as revealed in the scoop troughs and the piles of sediment on the right side of each, is finer sand, which is darker brown as compared with the dust on the surface. The left end of each trough wall shows alternating light and dark bands, indicating that the sand inside the drift is not completely uniform. This banding might result from different amounts of infiltrated dust, chemical alteration or deposition of sands of slightly different color. AFP PHOTO/NASA/HO

CHICAGO—The Mars rover Curiosity has offered a tantalizing taste of evidence that there was once life on the Red Planet, but scientists said Monday it is too soon to make much of the first soil analyses.

NASA’s Sample Analysis at Mars (SAM) instruments have been sending back information as it hunts for compounds such as methane, as well as hydrogen, oxygen and nitrogen, that are the building blocks of life.

Researchers were excited to detect simple organic compounds in the soil scooped up from a crusted dune. But they cautioned that the traces of carbon could have come from meteorites or even particles the instruments picked up before launch from Earth.

They hope to find more evidence of organic compounds as Curiosity makes its way across the barren, windblown sands of Rocknest towards Mount Sharp, searching for a good place to start digging deeper.

“It’s not unexpected that this sand pile would not be rich in organics. It’s been exposed to the harsh Martian environment,” said Paul Mahaffy, NASA’s principal investigator for Curiosity’s sample analysis.

“It’s going to be an exciting hunt to find early environments that might be protected from this harsh surface environment.”

The instruments captured stunning pictures of the sand scooped up from the drift — which one researcher described as coarser than flour but finer than sugar.

Curiosity was also able to analyze crystals and other materials found in the sand. By heating the samples, they were able to detect a significant amount of water in the sand, along with some carbon dioxide, oxygen, and sulfur dioxide.

“The Curiosity rover is kind of like a CSI laboratory on wheels,” Michael Meyer, the lead scientist for NASA’s Mars Exploration Program, told a news conference.

“These results are an unprecedented look at the chemical diversity of the area that is representative of the rest of the planet.”

Scientists do not expect Curiosity to find aliens or living creatures but they hope to use it to analyze soil and rocks for signs the building blocks of life are present and may have supported life in the past.

The $2.5 billion Curiosity rover — which landed in Gale Crater on August 6 — also aims to study the Martian environment to prepare for a possible human mission there in the coming years.

US President Barack Obama has vowed to send humans to the planet by 2030.