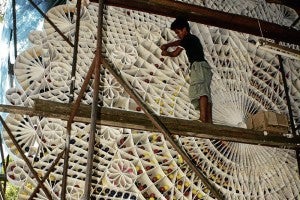 A LANTERN-MAKER from Barangay Sta. Lucia in the City of San Fernando in Pampanga fixes wires and bulbs to complete his village’s entry in the Ligligan Parul. E.I. REYMOND T. OREJAS/ INQUIRER CENTRAL LUZON

CITY OF SAN FERNANDO—As the tradition of making giant Christmas lanterns in this Pampanga capital entered its 104th year, craftsmen vowed to display more colorful and innovative creations in a festival like no other in the Philippines.

The festival, now on its 81st year, was started in 1931 in honor of the late First Lady Aurora Aragon Quezon. Banda 31 of Sasmuan town provided brass band music to the lantern of Del Pilar then.

More for the honor and bragging rights than for the P104,000 prize, the villages want their giant lanterns to be adjudged the brightest, most beautiful modern versions of the Star of Bethlehem.

Biblical accounts show that the Star of Bethlehem guided the Three Wise Men to the manger where Jesus Christ was born more than 2,000 years ago.

Eric Quiwa, who designed the entry of Sta. Lucia, promised to give spectators a burst of color when his village’s lantern “performs” on festival night.

Teddy Aguilar said the Sto. Niño lantern would stand out because of its many rotors.

A rotor is a local invention that enables the bulbs to seemingly dance in a lighting pattern in sync with the music. Rodolfo David, grandson of the pioneer giant lantern-maker, Francisco Estanislao, created this device.

The making of the Christmas lanterns is also an occasion for “bayanihan” (cooperation) among craftsmen and community members here.

In August, the Sta. Lucia and San Pedro lanterns survived the floods caused by the damage to the San Fernando-Sto. Tomas-Minalin tail dike.

Because the bulbs and wire were beyond repair, the barangay council in San Pedro Cutud solicited P200,000 to add to the P125,000 subsidy from the city government and private sector to each entry, said village chief Remegio de la Cruz.

While the production cost for every 20-foot-diameter lantern is four times bigger than the top cash prize of P104,000, De la Cruz said: “Tradition has to continue. It’s like a ‘panata’ (vow).”