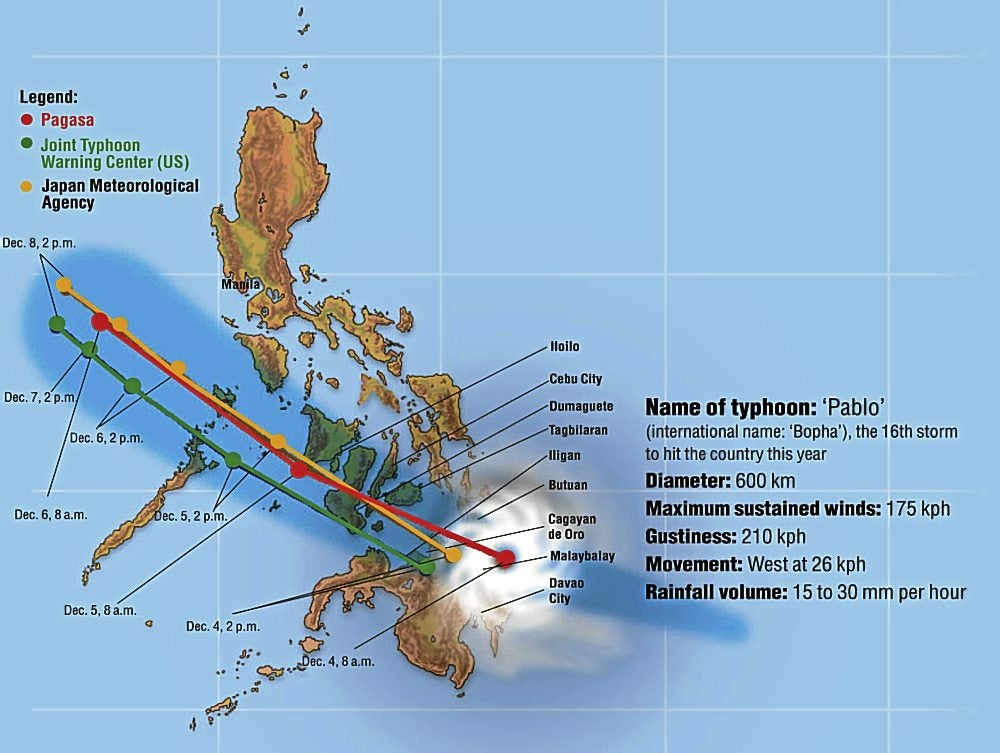 Hundreds of coastal residents fled their homes Monday as Typhoon “Pablo” barreled toward the northeastern part of Mindanao with maximum sustained winds of 175 kilometers per hour gusting up to 210 kph.

Authorities shut down schools and government offices in the regions where the potential supertyphoon was likely to hit early this morning.  Ferry boat operators and fishermen were told to stay ashore and civil defense units and the Philippine Coast Guard went on full alert ahead of the storm’s onslaught.

The National Disaster Risk Reduction and Management Council (NDRRMC) said close to 2,000 passengers had been stranded in nine seaports.

The council said the Department of Social Welfare and Development had allocated P42.35 million worth of relief goods for affected provinces, including P3.7 million in stand-by funds. Prepacked food items were ready to be distributed to some 10,000 families in Mindanao, the agency said.

“The weather is good right now but we keep advising local governments not to be complacent because this is going to get worse,” said Olive Luces, the regional director of the Office of Civil Defense in the Caraga region.

“Everyone is hoping that it won’t be that fierce,” said Social Welfare Secretary Corazon Soliman after officials briefed President Aquino in Malacañang on disaster relief preparations.

Pablo (international name: “Bopha”) was spotted at 10 p.m. Monday in the Pacific 230 km southeast of Hinatuan City in Surigao del Sur. It was moving westward at 26 kph and was expected in Surigao del Sur Tuesday morning.

“Let’s pray that, while this storm is expected to be stronger than ‘Sendong,’ we’ll be spared from a severe calamity,” Vice President Jejomar Binay said.

Rear Adm. Luis Tuason Jr., officer in charge of the Philippine Coast Guard, placed the agency’s units to “brace up for the coming onslaught.”

Tuason warned ferry operators and fishermen against putting out to sea in the areas on the path of the typhoon.

Environment Secretary Ramon Paje ordered key field officials of his department to link up with local disaster management councils and issue geohazard advisories, saying that he expected the typhoon “to dump an unusual large volume of rainfall, especially in Mindanao.

Paje said the advisories should include relocation sites and “must point susceptibility levels of areas to landslides, floods, flash floods and debris accumulation zones, and must include warnings.”

Gobenchiong said maritime operations all over the region particularly at the Butuan, Surigao and Dinagat ports had been suspended.

In Hinatuan and the capital town of Tandag in Surigao del Sur, forced evacuation was implemented in six coastal villages.

Surigao City Mayor Ernesto Matugas suspended classes in all levels and port operations and ferry boat trips in and out of the city were canceled. Gymnasiums in the area were already crammed with evacuees Monday.

Butuan City Mayor Ferdinand Amante said disaster rescue and relief personnel were on stand by and evacuation sites had been readied.

Dinagat Island Gov. Glenda Ecleo shut down schools and government offices Monday morning, while the Philippine Coast Guard ordered a no-sailing, no-fishing policy this noon in all areas of Caraga.

In Agusan del Sur, residents in low-lying and landslide-prone areas were told to evacuate. Gov. Adolf Edward Plaza directed the 14 town mayors of the province to designate evacuation centers. Classes were also suspended in San Francisco town at noon Monday.

In Cagayan de Oro City, Archbishop Antonio Ledesma on Monday called for a briefing with lead government agencies. The Church will act as a coordinating body for the local government of Misamis Oriental and the city.

The Provincial Disaster Risk Reduction and Management Council of Surigao del Norte has passed a resolution declaring forced evacuation for residents living in identified “high risk” areas all over the province.

Compostela Valley Gov. Arturo Uy said he  ordered mining communities as early as Saturday to move to safer ground as they were most vulnerable to landslides. Uy, who was attending a peace and order meeting in Davao City, said he had asked people living near riverbanks to evacuate.

Davao del Norte Gov. Rodolfo del Rosario said over 100 volunteers were on standby in the province.

“I have asked the disaster office to issue  regular updates for us to keep ourselves abreast of the status of the storm and be aware of its effects, so that we can immediately come to the  aid of neighboring communities,” said Davao City Mayor Sara Duterte.

Gov. Mujiv Hataman said the Autonomous Region in Muslim Mindanao was also bracing for the typhoon.

Hataman said his office would monitor water levels in catch basins where floodwaters from Bukidnon, North Cotabato and South Cotabato drain in Lanao or Cotabato City.