‘House vote on RH bill can go either way’ 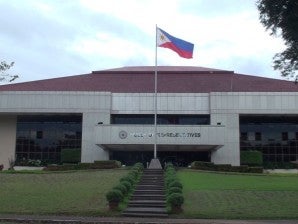 MANILA, Philippines — President Benigno Aquino III on Monday aired a fresh call to lawmakers during a crucial caucus on the reproductive health bill in Malacañang: Vote on it according to your conscience, but do it soon.

But as the lawmakers drove back to the House of Representatives to resume plenary deliberations on the population management bill, it became clear that even members of the President’s Liberal Party were divided on it.

The House must race against time to vote on the measure before the holiday season, otherwise it might be too late, and too close to the campaign season for the mid-term elections in May 2013, a Malacañang official earlier said.

“He has two messages: first, decide on the issue as soon as possible and second, vote according to your conscience,’’ House Deputy Speaker Raul Daza said in an interview outside the Malacañang gate after the caucus.

The President first met with LP party-members, led by Speaker Feliciano Belmonte Jr., and then with members of its coalition partners, Nacionalista Party, Nationalist People’s Coalition and National Unity Party (formerly Kampi) from 11 a.m. to around 1:30 p.m.

The President let the lawmakers spoke first before he did, officials said.

“Basically he feels that it should not be left hanging and that at some point in time, the bill should be put to a vote. That’s all he said. He left it to everyone’s conscience as to how to vote,’’ Nueva Ecija Rep. Rodolfo Antonino said in an interview.

Aquino did not tell the lawmakers to vote for the controversial legislation, Daza and Antonino said.

“It’s now up to the leaders to schedule when will that (voting) be, and how to go about it,’’ Antonino said.

“This is what the President said, `I’m pro-responsible parenthood. But if you vote for this, you should be following your conscience’,’’ she said in a briefing.

The President called the caucus basically to tell the lawmakers to produce a quorum and end discussions on the bill by voting for it, added Valte, who was present at the President’s caucus with LP members. “There just has to be an end to the discussion somewhere. We cannot leave it hanging.’’

For weeks, the bill has been stuck in the period of amendments in plenary due to a lack of quorum caused by absent lawmakers who were either campaigning or feared provoking the ire of their parish priests in the run-up to the May 2013 elections.

It was only last week, after finally mustering quorum, that the lawmakers adopted a “substitute bill’’ for debate.

The new version prioritizes the poor in the provision of birth control methods and bans contraceptives that prevent the implantation of a fertilized ovum, which is considered abortion by the Catholic Church.

Daza, a party-mate of the President, said he agreed with Aquino that the bill should be put to a vote at the soonest possible time.

“Like everyone else, especially, the members of the Liberal Party, will follow that, regardless of the vote,’’ he said in the interview.

Daza said nobody requested the President to certify the measure as urgent, but doubted Aquino would do this, saying “he’s already said he’s parsimonious about certifying bills as urgent.”

Daza also admitted that even LP members in the House numbering 94 were divided on the bill. He said he himself would vote against it, saying that there’s no “public calamity or emergency’’ that necessitating its immediate enactment.

“It’s a close vote,’’ he said when asked how LP members in the House would vote on it. “Even the President acknowledged that all the parties are divided. Even the minority is divided.’’

Secretary Manuel Mamba, head of the Presidential Legislative Liaison Office, earlier said that the pro-RH lawmakers had a slim margin over the anti-RH lawmakers, and the vote could “go either way.’’

According to Antonino, the lawmakers were not asked to give a response to the President’s statement.

Three-fourths of LP members turned up at the caucus, moderated by Belmonte, Valte said.

Representatives Henedina Abad of Batanes, Fernando Gonzalez of Albay, Majority Leader Neptali Gonzales II, and Daza were among those who shared their views on the bill during the LP’s caucus with the President, she added.

“It was a matter of the individual positions of the congressmen who stood up,’’ she said.