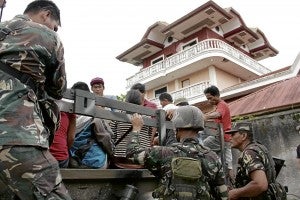 ARMY troops arrest flying registrants from Iligan City and Misamis Oriental on July 18, the last day of general voters’ registration in Lanao del Sur. Some of the registrants, typhoon survivors, were brought to the Army headquarters in Marawi City for investigation and were released and returned to their houses. RICHEL V. UMEL / INQUIRER MINDANAO

ILIGAN CITY—Leading politicians in Misamis Occidental welcomed the recommendation of the Philippine National Police to declare the province an election hot spot.

Recently, the Department of the Interior and Local Government (DILG), which has supervisory control over the PNP, has named Misamis Occidental among the 15 provinces in the country where the election could be heated.

Rep. Loreto Leo Ocampos, local chair of the Liberal Party, said the hot spot declaration should usher in a “freer atmosphere for voters.”

Ocampos noted several allegations of voter intimidation “and even harassment on some local media people” during the 2010 polls.

“I am not aware there was such an assessment made by the PNP; I only knew it in the news. But if I were asked, I would have a similar recommendation,” Ocampos told local journalists.

“If that is the assessment of the authorities, so be it,” said Vice Gov. Henry S. Oaminal when interviewed over radio in Ozamiz City.

At first, Oaminal expressed surprise at the DILG announcement. “I was just apprehensive that this can have a negative impact on the total security image of the province,” he explained.

Oaminal will square off with Ocampos for the congressional seat of the province’s second district.

Areas declared hot spots will enjoy greater focus from state security forces as the electoral season formally begins in January. This is aimed at deterring any untoward incident that could affect the integrity of the electoral exercise.

If the situation worsens, such areas can be placed under direct control of the Commission on Elections, thereby giving the poll body complete command of the locality.

“If we want the result of this election to be truly reflective of the voters’ will, then it’s no big deal to be an election hot spot,” Ocampos added. Ryan D. Rosauro, Inquirer Mindanao