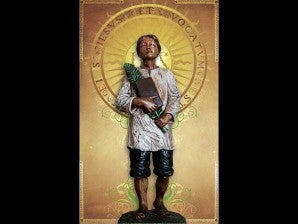 OUR VERY OWN. The wooden sculpture of Pedro Calungsod by Felix “Kid” Baldemor of Paete, Laguna, is superimposed against the seal of the Holy Name of Jesus, which hangs in the room where St. Ignatius Loyola, founder of the Jesuit Order, worked and guided his Order at the Gesu, in Rome. Calungsod will be canonized Sunday in the Vatican to become the second Filipino saint, after San Lorenzo Ruiz. Photo illustration is by Ricardo G. Velarde. EDWIN BACASMAS

Last month, Pope Benedict XVI canonized the teenager from central Philippines who joined Spanish Jesuit missionaries to Guam in 1668 to convert the native Chamorros. He was killed when the natives resisted.

Cardinal Ricardo Vidal urged the faithful to emulate Calungsod’s love for Christ and sacrifice for his fellow men.

Police say up to 900,000 people flocked to the open-air thanksgiving Mass. Among them was President Benigno Aquino III.