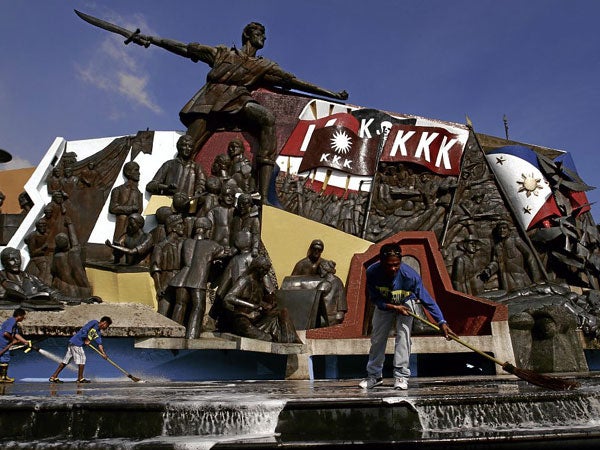 BONIFACIO AT 149. Workers prepare the shrine of Andres Bonifacio at Manila’s Plaza Lawton on Thursday for Friday’s observance of his 149th birth anniversary. Bonifacio was the founder and later supreme commander of the Katipunan movement that launched the Philippine Revolution for independence from Spain in 1896. RAFFY LERMA

Andres Bonifacio is best known in Philippine history as the Supremo of the Katipunan, the peasant army that launched the Philippine Revolution against Spain in 1896.

But little else is known about Bonifacio, making him an elusive character in the Philippines’ struggle for independence.

Stories about the orphaned boy single-handedly supporting his siblings by selling fans and walking sticks, a theatrical performer and amateur poet, a highly literate bodeguero skilled enough to manage foreign trading firms have so romanticized our image of Bonifacio and his life that historian Glenn Anthony May commented:

“… Bonifacio has been posthumously re-created. He has been given a new personality and a childhood that may bear little resemblance to his real one … The national hero who has emerged from this process of re-creation—the Bonifacio celebrated in history textbooks and memorialized in statues around the Philippines—is, in reality, something closer to a national myth.”

Much of what Filipino students of history know about Bonifacio has been culled from the writings of historians based on firsthand narratives of witnesses and protagonists in the national uprising.

But those writings are colored by the historians’ subjective interpretation, such as the article of Epifanio de los Santos in Revista Filipina that aims to vindicate the Supremo against the “cold and hostile … to the extent of objecting to his being given due recognition”  and the view that Bonifacio was the progenitor of a “class struggle” that arose from the inadequacies of the Reform Movement and apathy of the educated gentry for the masses.

Fate has been unkind to Bonifacio. His mystery-shrouded life ended in an ignominious death.

And the only tangible proofs of his existence are a faded photograph and some sparse writings, contentious evidence endlessly debated by historians.

But the snippets of prose and poetry may provide a clear picture of the personality and the rational workings of Bonifacio’s mind.

They reveal a man with an adequate education, adept at writing using an elegant hand and passionate about his idealistic and nationalistic principles.

Bonifacio’s revolutionary poetry diverged from the critical yet cautious literature of the Reform Movement.

According to literary critic Bienvenido Lumbera, poetry composed by ilustrados like Marcelo H. del Pilar during the period of the Reform Movement employed popular literary forms such as the duplo, a verbal joust in improvised versification, retaining its romantic air but encapsulating a witty political opinion in order to gain the attention and involvement of the masses in the struggle for reform.

Though Del Pilar’s caustic poetry such as “Sagot ng España sa Hibik ng Filipinas” (Spain’s Response to the Philippine Cry) primarily assailed the abuses of the friars and advocated concerted action by the Filipinos, there was a note of restraint and ambiguity—either to endure oppression or work for the country’s good—since no aid could be expected from a feeble Spain:

(This is all that can be said in reply

to your plaint by your crippled mother, dear one;

your vessel is fragile: let not your sons sleep

for a tempest tosses at mid-sea.)

Conversely, Bonifacio’s “Tapunan ng Lingap” (Care a Little) admonishes his countrymen to reject the reprehensible habits and way of life of the Spaniards, which had tarnished the Filipinos’ native psyche, and encourages a revolt against oppression, bravely facing the enemy to protect the country’s interests:

(Brothers of mine, banish fear

of the imbecile Spaniard’s exaggerated boast,

it is the habit of he who is devoid of courage

to frighten us—even with his mouth.

And don’t be afraid to fight

the race of executioners, the Spanish race,

they are here in order to usurp,

they want to get what is ours.)

In the same vein, Bonifacio’s prose works such as “Dapat Mabatid ng mga Tagalog” serve as a declaration of distrust and repudiation of Spain’s failure to abide by its promises to bring justice and prosperity to the Philippines, justifying a revolution to cleanse societal evil:

Proficiently written in the vernacular, Bonifacio’s literary works served as a catalyst for the nationalist awakening through the Katipunan, spurring on the Filipino’s political development and popularizing Tagalog poetry during the late 19th century.

True enough, though little known are the physical traits and features of Bonifacio, a virtual persona of bravery and patriotism arises from his surviving literary works.

A deeper investigation is necessary to uncover the elusive Bonifacio. Another interesting area of inquiry is the formation of his character through his choice of books to augment his thirst for knowledge.