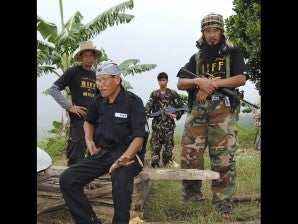 DAVAO CITY, Philippines – The explosion that killed a member of Ameril Umra Kato’s Bangsamoro Islamic Freedom Movement and wounded nine others in Maguindanao on Monday was the result of an attack “by other unidentified forces,” the group’s spokesperson said Thursday.

Abu Misry Mama told the Philippine Daily Inquirer by phone that there was no truth to a military claim that a group of BIFM fighters, including their chief of staff Mohaiden Animbang, were carrying the explosives and that these detonated prematurely.

Earlier, Col. Prudencio Asto, spokesperson of the military’s 6th Infantry Division based in Maguindanao, said the military believed the BIFM guerrillas were in possession of explosives fashioned out of 81-millimeter mortar shells when the blast took place in Barangay Lower Salvo in the town of Datu Saudi Ampatuan.

But Mama said the guerrillas were not carrying any explosive at that time, although they had firearms, as they were on their way to a conference.

He said the convoy of BIFM forces came under attack.

“But we would not yet disclose the identities of the group and individuals involved in the incident until we finish the investigation,” Mama said.

He said the BIFM would vigorously pursue the attackers and will mete out the death penalty on them.

Mama said they would follow Islamic law in the process, which recognizes death penalty if the crime was committed intentionally.

The BIFM broke away from the Moro Islamic Liberation Front in 2010 because of disagreements over peace talks with the Philippine government.

The exact number of Kato’s followers, mainly Maguindanaons, is unknown; government estimates vary from 500 to just over a thousand armed men.