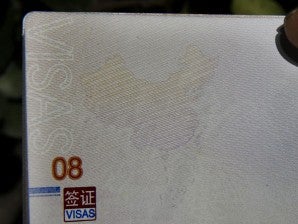 A Chinese man holds up a Chinese passport with details on a page that shows dashes which include the South China Sea as part of the Chinese territory outside a passport office in Beijing, China, Friday, Nov. 23, 2012. AP/Ng Han Guan

Although it is not a claimant itself, Indonesia has mediated in the dispute between China and several members of the Association of Southeast Asian Nations (ASEAN), using its position as the bloc’s biggest economy as leverage.

It is also a major supplier of commodities to China, which is increasingly exploring mines and constructing smelters in Indonesia to fuel its economy.

Indonesian Foreign Minister Marty Natalegawa, who has hopped between claimant nations this year over the issue, warned that the passports would worsen the already tense dispute and said Jakarta would convey its position to Beijing.

“These actions are counterproductive and will not help settle the disputes,” he said in an interview with the Jakarta Post daily.

“We perceive the Chinese move as disingenuous, like testing the water, to see its neighbours’ reactions,” he said.

He said ASEAN should concentrate on finalising a code of conduct as a first step to alleviate tensions over the issue.

“I hope that we, ASEAN and China can focus on dialogue,” he said.

Beijing has infuriated its southern neighbours with its increasingly vocal claim to vast swathes of the South China Sea, with Chinese maps showing a dotted line that runs almost to the Philippine and Malaysian coasts.

India has started stamping its own map onto visas for Chinese visitors as the passports also show the disputed border areas of Arunachal Pradesh and Aksai Chin as Chinese territory.

Beijing has attempted to downplay the diplomatic fallout from the recently introduced passports, with the foreign ministry arguing the maps were “not made to target any specific country”.