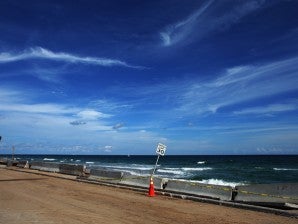 PARIS – Sea levels are rising 60-percent faster than the UN’s climate panel forecast in its most recent assessment, scientists reported on Wednesday.

At present, sea levels are increasing at an average 3.2 millimetres (0.125 inches) per year, a trio of specialists reported in the journal Environmental Research Letters.

This compares with a “best estimate” by the UN’s Intergovernmental Panel on Climate Change (IPCC) in 2007, which projected that by today, the rise would be 2 mm (0.078 inches) per year.

The new figure converges with a widely-shared opinion that the world is heading for sea-level rise of around a metre (3.25 feet) by century’s end, co-author Grant Foster of US firm Tempo Analytics told AFP.

“I would say that a metre of sea level rise by the end of the century is probably close to what you would find if you polled the people who know best,” Foster said.

“In low-lying areas where you have massive numbers of people living within a metre of sea level, like Bangladesh, it means that the land that sustains their lives disappears, and you have hundreds of millions of climate refugees, and that can lead to resource wars and all kinds of conflicts,” he added.

“For major coastal cities like New York, probably the principal effect would be what we saw in Hurricane Sandy.

“Every time you get a major storm, you get a storm surge, and that causes a major risk of flooding. For New York and New Jersey, three more feet of water would be even more devastating, as you can imagine.”

The investigation, led by Stefan Rahmstorf of Germany’s Potsdam Institute for Climate Impact Research (PIK), gauged the accuracy of computer simulations that the IPCC used in its landmark Fourth Assessment Report in 2007.

That report jolted governments into nailing climate change to the top of their agenda, culminating in the ill-fated Copenhagen Summit of 2009, and helped earn the Nobel Prize for the IPCC.

The new study gave high marks for the document’s forecast on global temperature, saying there was a “very good agreement” with what was being observed today, an overall warming trend of 0.16 degrees Celsius (0.28 degrees Fahrenheit) per decade.

But it said the IPCC’s projection for sea levels was much lower than what has turned out.

The panel’s prediction for the future — of a rise of up to 59 cms by 2100 — “may also be biased low,” it warned, a caution shared by other studies published in recent years.

Foster said the bigger-than-projected rise could be attributed to meltwater runoff from land ice, something that was a big unknown when the IPCC reported in 2007 and remains unclear today.

Other factors were technical uncertainty, he said.

The IPCC’s projection had been based on information from 1993 to 2003, and there has been more data since then, helping to prove the accuracy of satellite radars that measure ocean levels by bouncing radar waves off the sea surface.

The IPCC’s Fifth Assessment Report will be published in three volumes, in September 2013, March 2014 and April 2014.