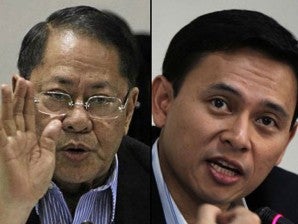 A Church-backed group of 120 peasants has mounted a 350-kilometer march to press demands that President Aquino review a 12,000-hectare economic zone rising in the remote coastal town of Casiguran in Aurora province that they say will drive them out of their homes and keep them impoverished.

The 18-day march by farmers, fishermen and indigenous Dumagats representing 3,000 families opposing the project of the politically influential Angara clan began on Saturday.

On Monday, the group reached Dinalungan town. It was poised to head Tuesday toward the Aurora capital of Baler, where security checkpoints had been set up following a clash on Nov. 24 between police and communist New Peoples Army guerrillas.

“They will undergo routine inspection and will be allowed to pass through when cleared,” Senior Supt. Teodorico Perez said, Aurora police director, said by telephone.

The march is being held as Congress considers a proposed P353-million budget next year for the Aurora Pacific Economic Zone and Freeport Authority (Apeco)—a grand design to develop one of the most impoverished regions in the country by promoting tourism and encouraging investments in aquamarine, agro-industrial enterprises, business outsourcing and financial services.

“They have crossed mountains, upland trails and earth roads,” said Fr. Joefran Talaban, who was marching with the protesters in what was billed as a “march for justice and matuwid na daan,” a reference to the President’s anticorruption program straight path.

“Their spirit is high,” Talaban said by telephone Monday.

The protesters, holding signs assailing the project and the Angara family, stopped at various points to rest, attend Mass and hold short programs explaining why they were opposing the project in the seaside municipality with a population of 23,000, Talaban said.

When they reach Metro Manila, the marchers said they would ask Mr. Aquino to stop the project.

Sen. Edgardo Angara and his son, Aurora Rep. Juan Edgardo Angara, sponsored the laws creating Apeco, which covers 12,923 ha in Casiguran and makes it the country’s first economic zone on the Pacific coast and the only transhipment port facing the east.

Senator Angara is running for Aurora governor next year to replace his sister, Gov. Bellaflor Angara-Castillo, who is taking a shot at her nephew’s congressional seat; Representative Angara is aspiring to become a senator as a ruling Liberal Party candidate.

Talaban said the marchers were to celebrate Mass with Manila Archbishop Luis Antonio Cardinal Tagle on Dec. 9, when they reach the capital.

“The Church is marching with the poor,” Talaban said.

The oldest marcher is Florentino Gaped, 75. He is asserting ownership of a piece of land in the 105-ha Sitio Reservacion that is reportedly being annexed to Apeco.

The youngest marcher is 8-year-old Banoy Bitigan, a Dumagat whose parents are defending their ancestral domain.

Two marchers have quit because of exhaustion, organizers said.

Talaban said after Baler, the marchers would proceed to San Luis and Maria Aurora towns in Aurora, Pantabangan and Cabanatuan and Gapan cities in Nueva Ecija, Bulacan and Metro Manila. They were to overnight in churches along the way.

The marchers said they undertook the protest after discussions with lawmakers and officials of the Department of Agrarian Reform since 2010 failed to stop the Apeco’s operations.

They said the project would displace residents, remove their sources of livelihood and disrupt their lives.

They said the development of the special economic zone had intruded into ancestral lands and led to the seizure of large tracts of prime agricultural land.

“For five years already, the lands and livelihoods of Casiguran’s poor have been put in peril by the Aurora ecozone,” Talaban, spokesperson for the group, said in a statement.

“Instead of rewarding Apeco with continued access to public money, our national government must instead hold it accountable for the legal violations that have consistently hounded its activities,” Talaban added.

The marchers intend to meet with the President to ask for a possible repeal or modification of the Apeco law. They also want zero funding for the project while the evaluation is ongoing.

Representative Angara said the marchers were raising “old issues which that were rehashed every time the budget of Apeco is discussed in Congress.”

Kent Avestruz, Apeco deputy administrator, downplayed the march, saying that most of the people in Casiguran supported the project and that the ancestral rights of the Dumagats were being respected.

“We admit that at the start, there was strong resistance against Apeco because they did not know what activities we would do. We started to explain to them how they can be integrated, and what we can do for them,” he said.

Avestruz said the ecozone had projects for farmers and fisherfolk. He said the groundbreaking for an ice plant and cold storage facility for them was held recently.

By the first quarter of 2013, a housing project for residents affected by the construction of the airport is expected to be in place, he added.

Avestruz warned that if the development was stopped, many people would lose livelihood opportunities, considering that many investors had expressed interest in the area.

Protest organizers said that residents of Casiguran were unlikely to reap the benefits of development, pointing out that the natives did not have the necessary skills required in the new undertakings.

“We, the farmers, fisherfolk and IPs of Casiguran have had enough of Apeco’s endless dangers to our future,” said fisherman Marlon Angara. “We are walking to stop Apeco’s seizing of lands but we are also walking to show President Aquino that we are one with him in his commitment to ensuring good governance and social justice.”

The marchers are supported by the National Secretariat for Social Action of the Catholic Bishops Conference of the Philippines, Association of Major Religious Superiors, the peasant federation Pakisama, the Save Sierra Madre Network Alliance, Sulong Carper and AR (agrarian reform) Now!

The Apeco project has been mired in controversy. In October 2011, a petition was filed asking the Supreme Court to declare the law creating it as unconstitutional.

Urban planner Felino Palafox has also filed a complaint in the Office of the Ombudsman against the Angaras for allegedly pushing the project despite environmental concerns.

He said the area, doormat to several dozen storms blasting the country from the Pacific annually, was prone to flooding and soil liquefaction.

Sen. Edgardo Angara in turn has sued Palafox for libel.