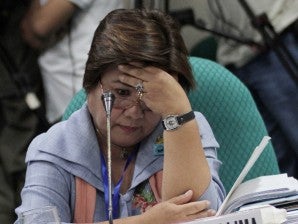 President Benigno Aquino has created a super body that will investigate old and new cases of extrajudicial killings, enforced disappearances, torture and other grave human rights violations, with “greater priority” to be given to those committed under the administration of President Gloria Macapagal-Arroyo.

Justice Secretary Leila de Lima on Monday released to reporters Administrative Order No. 35 creating this body, which she said the President signed on Nov. 22, the eve of the third anniversary of the infamous massacre of 58 people allegedly by members of the Ampatuan clan and their followers in Maguindanao in 2009.

Under the AO, the President created a nine-member “Inter-agency committee on Extra-Legal Killings, Enforced Disappearances, Torture and Other Grave Violations of the Right to Life, Liberty and Security of Persons.”

No room for political violence

all these forms of political violence and abuses of power by agents or elements of the state or nonstate forces,” the six-page order reads, noting that the committee aims to resolve unresolved cases.

Headed by the secretary of justice, the members of the committee include the chairman of

Serving as observers and resource persons to the committee are the chairman of the Commission on Human Rights and the Ombudsman.

The committee is tasked to conduct an inventory of unsolved cases as well as those under investigation, under preliminary investigation and under trial in its first 30 days.

After the inventory, the committee will assign special teams to investigate the cases “for the possible identification of the perpetrators.” The order says priority will be given to “high profile” cases that were perpetrated under the Arroyo administration.

A special oversight team will monitor developments in cases under investigation, preliminary investigation and under trial.

A special team of investigators and prosecutors will also be created to look into “new cases.”

The committee is expected to submit a report to the President “after six months from its creation and every six months thereafter.”

Violence tasked to undertake the prevention, investigation, prosecution and punishment of political violence.

Former President Arroyo had armed the task force with the powers and funding to stem the tide of killings of leftist activists and all other cases related to “political violence.”