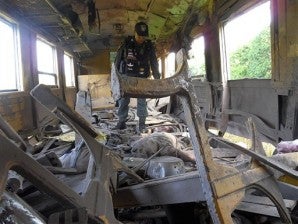 A Thai police officer examines the damage inside a train near the body of a railway guard after an attack by suspected insurgents in Rue So district of Pattani province, southern Thailand, on Nov. 18, 2012. Teachers in insurgency-wracked southern Thailand decided Monday to suspend classes at hundreds of schools in the region over the killings of education workers by Muslim militants. AP PHOTO/RAPEE MAMA

BANGKOK, Thailand—Teachers in insurgency-wracked southern Thailand decided Monday to suspend classes at hundreds of schools in the region over the killings of education workers by Muslim militants.

“We want to put pressure on security forces and the government to take greater care of our safety,” Boonsom Thongsriplai, chairman of the teachers association in the region, told AFP.

A female school principal was killed last Thursday in Pattani’s Nongchik district, the latest of scores of teachers targeted by the insurgents.

The move means 321 schools will temporarily shut from Tuesday in Pattani, one of several southernmost provinces plagued by an eight-year-old insurgency. It is unclear when they will reopen.

The unrest has claimed more than 5,300 lives, both Buddhist and Muslim, with near-daily bomb or gun attacks.

Teachers working in non-religious schools are frequently targeted because they are seen as a symbol of government authority. Militants view the school system as an effort by Bangkok to impose Buddhist culture on the south.

More than 150 education workers have been killed in the Thai south since 2004. The latest victim was a head teacher who was gunned down last week.

Critics accuse the government of failing to address the grievances of Thailand’s Malay Muslim minority, including alleged abuses by the military and a perceived lack of respect for their ethnic identity, language and religion.—With AP