90-year-old Binondo building to be turned into call center 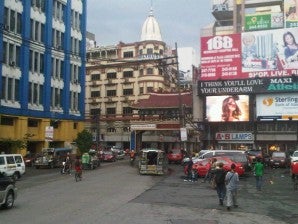 MANILA, Philipines—A 90-year-old building in Binondo, Manila, is set to house call center locators with the prospect of starting the ball rolling for the revival of the historic Escolta commercial district.

The heritage building where the First National City Bank used to be is being restored and will be open for marketing as Juan Luna e-Services Building in a couple of months.

“We have a lot of buildings (in Escolta) that are not occupied. We don’t want to tear them down. The call center industry is growing and we have the talent and space. It’s just a matter of transforming these buildings into usable space,” said property developer Jose Berenguer III, vice president of Gealach Inc.

Under the law, 50-year-old buildings could only be modified or torn down after an evaluation and approval of the National Commission for Culture and the Arts. Through adaptive reuse, as what is being done in Juan Luna Building, the heritage buildings on Escolta could be refurbished into technology centers while maintaining the architectural aesthetics and the district’s historical identity.

“Escolta used to be a high-end shopping center; we had the best jewelry and clothes stores. For example, the building of Savory Chicken used to be Estrella del Norte, which was a very fine jewelry store,” said Gemma Cruz-Araneta, president of the Heritage Conservation Society, which has been meeting with Escolta building owners for more than a year now.

“Escolta has been central to the history of this city for centuries,” architect Dominic Galicia, former HCS vice president, had said in a dialogue with the city government more than a year ago, when the [email protected] initiative started.

“Memory is an important part of the human experience. I am talking about the confluence of elements that makes an experience of lasting impact,” he said then. “Such a confluence resides in Escolta, between Plaza Moraga and Plaza Sta. Cruz, and hidden—not deeply, but still hidden—by Meralco wires and the indifference of a city.”

Plans for Escolta renewal will also have to address flooding, transport, traffic and security issues.

He also cited the need to light up the walkways to the LRT line and keep out the beggars, rugby boys and snatchers.

Dy said that in previous talks, call center companies had expressed the need for a redundant power source and optic fiber, which were available in Escolta with some rewiring and extension. The need for a pool of manpower is also addressed with the numerous universities in the area.

But he rued the prevailing “wait-and-see” attitude that “I will do this if somebody does this.”

For architect Manolo Noche, HCS corporate secretary, things will fall into place once the right investors are drawn in the area.

“To a certain extent, (Berenguer’s) endeavor to bring e-commerce in Escolta will bring a certain amount of interest especially for businesses looking for space that want a certain level of history involved in the location,” Noche said.

“If you’re able to attract that type of client, then everything else will follow. Once you have the company, this will bring in employment opportunities,” he said, adding that call center companies would necessitate 24/7 operating facilities, dormitories for the agents, and a kind of lifestyle that would be attractive to riverside cafes.

“There can be a marriage of preserving and at the same time moving to a new direction. It’s a matter of attracting developers that could be enlightened with palatable solutions to the development here,” Noche said.

Building owner Andrew Arriola said the initiative to revive Escolta would be a way of giving back to the city that has historically nurtured the businesses. “Renewal in Manila is being done step by step, we want to be ahead. Escolta has been very resilient despite the challenges. We have continued despite the setbacks.”

“We believe that in due time, Binondo will be rife for redevelopment,” Berenguer said.