From store gimmick to gift of joy in 55 yrs 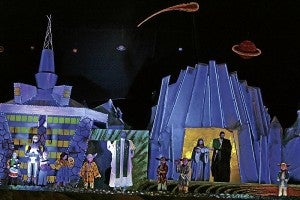 BELOVED TRADITION. Christmas won’t be complete for kids in the metropolis without a night watching the COD display and its cast of moving mannequins. The show has been running for half a century after starting out as a one-piece promotional gimmick powered by an electric fan motor at a Manila department store. JOAN BONDOC

Like toys that come to life every Christmas season, the colorful cast of the ongoing “COD” show at Greenhills Shopping Center (GSC) in San Juan City has put a space-age spin to Bethlehem. But while the theme varies each year, the newborn Christ remains at the center of this universe of dazzling lights, musical narratives and dancing mannequins.

Behind the scenes, meanwhile, another storyline remains unchanged: That of Alex Rosario and his “labor of love” that began 55 years ago.

Rosario, creator of the nighttime spectacle that has entertained children since 1957, remains very much involved in the production at age 88.

In a recent interview with the Inquirer, he retraced the journey that his creation had literally taken since its birth on Avenida Rizal, Manila.

Rosario was then president of Manila COD (Cash On Delivery), a family-owned department store, when he thought of a strategy to attract customers. “It started out as a gimmick. But as the years went by the people have expected the display every Christmas,” he recalled.

The store’s very first animated come-on, however, was not even a Yuletide figure but a “belly dancer” that tried to lure crowds from a window and moved with the help of an electric fan motor. Santa Claus later took her place on the store’s facade, he said.

In 1966, Manila COD transferred from Avenida Rizal to Araneta Center in Cubao, Quezon City, where its Christmas display resumed on a grander scale and its popularity peaked. By the 1970s, the company had invested in fiber glass mannequins to replace those made of paper mache.

It was during this period that the yearly productions began to be more fanciful to reflect “the spirit of the times,” Rosario said. When American astronauts landed on the moon in 1969, for example, the show that year was titled “Christmas Galactica.”

The Cubao store closed down in 2002. But thanks to the Ortigas family, the display found a new home in Greenhills. “They inherited the legacy of COD,” a grateful Rosario said.

decision was proven wise by the thousands of other families who now flock to Greenhills to pass the experience on to a new generation.

The show has retained the name COD, despite the change of venue, though it now stands for “Christmas on Display.” Costing roughly P10 million to mount, it continues to have different themes each year but always with the Nativity scene as the central piece, Ko added.

With the show now in its 10th year at Greenhills, Rosario remains a hands-on director who taps one of his nine children as his main assistant. “I’m really proud of my father,” Reymundo Rosario said of his old man.

About 25 more people—including four more father-and-son tandems—are working behind this year’s production, while half of the mannequins used on the Cubao sets are still in service.

Up to 15 crewmen are required to control the mannequins alone, four to mind the rails on which the dolls move, two to handle lighting and one person each to take care of sound, special effects and power supply. The workers include fishermen and farmers from the provinces who start reporting to the elder Rosario when set construction begins as early as July.

The 2012 theme is “Christmas on Planet Greenhills,” which Rosario said was inspired by the landing of the robotic rover Curiosity on Mars.

But will the COD show actually catch up with its high-tech imagery and be less dependent on manual controls or mechanical contraptions? Fragele Mendoza Jr., an information technology graduate in charge of maintenance, believes it’s just a matter of time.

Mendoza said there had been proposals to “computerize the show” but that initial demonstrations were still less than perfect. “The Rosarios want it to be 100-percent functional,” he said.

Mendoza envisions a future show where everything will be controlled from a computer room and robots (instead of mere mannequins on rails) will be performing and even interacting with the audience.

But then, spreading the timeless joy of Christmas requires no sophisticated software. Alex Rosario has proven this for the last 55 years, and thousands of children—many perched on their parents’ shoulders to get a better view—have agreed with him.

The COD Greenhills show runs till the Feast of the Epiphany on Jan. 6 next year.