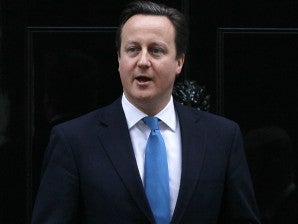 BRUSSELS—British Prime Minister David Cameron has ended his European isolation, for the time being at least, after Germany and other nations backed his call for cuts to the troubled EU budget.

Nearly a year ago Cameron was the outcast of Europe, finding himself shunned by angry counterparts when he vetoed a crucial fiscal pact that was aimed at tackling the crisis in the eurozone.

But this time there were few of the same recriminations and Cameron named Germany, Sweden, The Netherlands, Finland and Denmark as having backed his position.

By marshalling an austerity-supporting “northern European” bloc he will also please eurosceptics in his party back home who are threatening to rebel if he does not loosen Britain’s ties with the EU.

“This was not Britain as some sort of lone actor,” Cameron told a press conference.

“At this council a lot of people said, ‘Well, Britain will just be isolated and standing alone in standing up for a better deal.’ But we had strong allies.”

But a clearly frustrated Cameron still had choice words for the EU, saying the budget deal it offered was “just not good enough”, and insisting there should be cuts to the perks, pay and pensions of “eurocrats”.

“Brussels continues to exist as if it is in a parallel universe,” Cameron said.

“Last night the Commission didn’t offer a single euro in savings, not one euro, and I just don’t think that is good enough.”

A British source criticised a lack of preparation by EU President Herman Van Rompuy for the summit, saying it made negotiations more difficult.

Cameron did not escape unscathed from criticism on Friday.

Italian premier Mario Monti blamed him for the breakdown of the budget talks and accused him of “demagoguery”.

Hollande meanwhile said the British premier had come to the summit with a “set priority” to protect Britain’s cherished EU rebate.

Britain has claimed that right since then prime minister Margaret Thatcher obtained one in 1984 on the grounds that London was paying too much into the bloc’s coffers.

But Cameron’s diplomatic efforts appeared to bear fruit with overt support from Sweden and The Netherlands.

A British official said the German chancellor was “sympathetic” towards their position. Reports of an “axis” between London and Berlin quickly led to Cameron and Merkel being dubbed “Merkeron” or “Camerkel”.

Meanwhile an EU source said that while the rest of the bloc appeared unwilling to move towards the British position, it would not be sensible to send any country home to face voters without any concessions.

At home, Cameron is walking a political tightrope on the European issue.

He leads a fragile coalition government with the pro-Europe Liberal Democrats and faces elections in 2015 during which he will try to win a majority, for which he will need the “eurosceptic” wing of his Conservative party on-side.

The eurosceptics subjected Cameron to a humiliating parliamentary defeat on the budget issue last month and they have public opinion behind them, with many Britons seeing the EU as a meddling gravy train.

Europe has been a toxic issue for the party for decades, having helped to bring down Thatcher and hobbling her successor John Major.

But Cameron must also avoid burning all his bridges in Europe ahead of a summit in December focusing on banking, where he will be trying to protect London’s vital financial services industry.

For all the talk of a possible “Brixit” from the EU, Europe remains by far Britain’s largest trading partner, while Britain is the EU’s third largest economy.

British commentators said Cameron had “played a blinder” for now.

“Game, set and match to David Cameron,” John Rentoul, a political commentator for The Independent on Sunday newspaper, wrote on Twitter.

But the issue will not go away, and Cameron is expected to set out before Christmas his plans to reclaim powers from Europe and then put those measures to a vote.

“I support our membership of the EU, but I don’t support the status quo. I believe we need a new settlement,” he said.