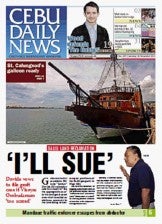 Gubernatorial candidate Hilario “Junjun” Davide III yesterday said he is ready to “file the appropriate case” in the anti-graft court over what he called an obvious anomaly in the land filling of submerged portions of the Balili property in Naga City.

He said the discovery of ongoing reclamation work in the province-owned lot was “another offense” and constituted “obstruction of justice” by altering physical evidence of land that is the subject of a Sandiganbayan case.

Davide, a former Cebu city councilor and chairman of the Liberal Party’s province chapter, gave no date for his threat, a blow aimed at Gov. Gwendolyn Garcia, who is ending her final term in 2013 and running for congress in the 3rd district.

“If no one will take the cudgels, I am prepared to file the appropriate case at the soonest possible time,” Davide told reporters.

He said this was his personal vow “to restore transparency and accountability in the Capitol.”

Governor Garcia in an earlier interview said the reported discovery of ongoing reclamation work in the former Balili estate in a visit by Vice Gov. AgnestMagpale and Provincial Board Member Arleigh Sitoy was just a “publicity stunt” by her critics for the election.

In a press conference yesterday, Davide challenged private citizens and “civil society” to file a case.

He said no contract for reclamation passed through the Provincial Board, even as he questioned why “the governor is spending again” for the Balili estate in the amount of P27 million for the work.

He first expressed dismay that the Visayas Deputy Ombudsman Pelagio Apostol was “passing the buck” to his boss, Tanodbayan Conchita Carpio-Morales to decide on what to do with the discovery that underwater portions of the Balili property was being covered with limestone and soil by the Cebu provincial government.

The Sandiganbayan has yet to start the trial of Governor

Garcia and seven others facing graft charges for malversation of funds and entering into a grossly disadvantageous contract for the 2008 purchase of the Balili estate for P98.9 million.

Davide, who once worked as a graft investigator in the Visayas Ombudsman’s Office, said Apostol had the authority to act “motu proprio” or take the initiative to investigate on his own to determine the culpability of officials involved in the latest development of “covering up” submerged parts of the Balili estate.

Davide said the ombudsman has the power to immediately probe any reported anomaly without waiting for the filing of a formal complaint.

“The law in fact provides on its own, motu propio, the Office of the Ombudsman can investigate any matter especially reports of anomalies in the government labi na gyud kung kini naglambigit ug dagko gyud nga kantidad labi na kining Balili. Ang ma-prejudice gyud is ang interes sa katawhan (The ones who will be prejudiced in this case is the interest of the people),” he said.

Apostol on Thursday said he was written Morales to ask for advice on any action taken about the former Balili property case and to also clarify whether the reclamation of the property would affect the presentation of evidence for the prosecution in the graft case filed in the Sandiganbayan against Governor Garcia and seven other officials.

Davide said that if no one would dare stand up against the Capitol in connection with the backfilling of the 24.7 hectare site, he is willing to take the lead in filing a case against Capitol officials before the Ombudsman.

“This is my commitment to the Cebuanos to restore transparency and accountability in the Capitol… Klaro kaayo nga submerged underwater. Nganong ila man fillingan if yuta pa na? (It is clear that the property is underwater. Why then do they have to fill it up with soil?),” he said.

He said he knows his action would be labeled by the Garcias as politically motivated but “ I have always stood for transparent and honest government.”

He said they were just doing their duty as elected officials of the province./Carmel Loise Matus Correspondent