3 gov’ts remind PH: Do not forget 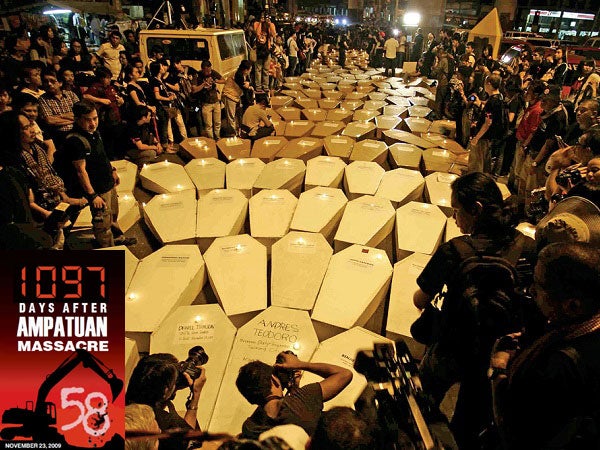 CRY FOR SWIFT JUSTICE. Militants on Friday bring to Chino Roces Bridge, formerly Mendiola Bridge, in Manila 153 coffins representing the victims of the Nov. 23, 2009, Maguindanao massacre and other journalists killed since 1986. On the third anniversary of the killings, they demand swift justice for the victims. MIKE ALQUINTO/CONTRIBUTOR

Three foreign governments on Friday joined the commemoration of the third anniversary of the Maguindanao massacre and reminded the Philippine government, which seemed to have forgotten the event, about its promise to bring the perpetrators to justice.

Nearly 200 people are facing charges for the massacre, but only 103 have been accounted for and the trial of those who have been charged moves no faster than a snail’s pace.

Many of those killed in the Maguindanao massacre were journalists.

The marchers, led by members of the National Union of Journalists of the Philippines (NUJP), challenged President Benigno Aquino III to make good on his promise to deliver justice to the families of slain journalists.

The governments of the United States, Canada and the United Kingdom issued statements on Friday offering condolences to the relatives of the victims and supporting their demand for justice.

“We offer our condolences to the families and friends of those killed,” US Ambassador to the Philippines Harry Thomas said. “We appreciate the efforts of the officials of the Philippine National Police, Department of Justice, and courts working to bring closure to this case. We shall never forget the victims of that merciless act committed in Maguindanao on Nov. 23, 2009.”

On that day, 58 people, 32 of them journalists, were killed in Ampatuan town, Maguindanao province, in an attack carried out by the leaders of the Ampatuan clan to stop a local rival from filing his candidacy for provincial governor in the 2010 elections.

In its own statement, the Canadian Embassy said “Canada stands with the Filipino people in the call for the rule of law to prevail and for those responsible to be brought to justice.”

“In remembering the victims, Canada understands that the massacre was not only a terrible act of violence but also an attack on the values shared by Canadians and Filipinos. Human rights, freedom of the press and freedom of expression are the cornerstones of our societies, and must be respected and protected.”

In a statement sent to the official of the regional government in the Autonomous Region in Muslim Mindanao (ARMM), British Ambassador to the Philippines Stephen Lillie said only the successful prosecution of the perpetrators could assure the relatives of the victims that justice had been served.

“While nothing can be done to bring back the lives lost, bringing the perpetrators to justice will go some way to help the victims’ families cope with their loss,” Lillie said.

“The swift resolution and successful prosecution of anyone guilty of involvement in these crimes would reinforce the UK and the Philippines’ shared aspiration of upholding a democratic society where human rights and individual freedoms flourish,” Lillie said.

“The UK stands in solidarity with the Filipino people and the victims’ families in honoring the memory of those who died in the Maguindanao massacre,” he said.

In Maguindanao, Gov. Esmael Mangudadatu on Friday led supporters, relatives and friends in commemorating the third anniversary of the worst political violence in Philippine history, in which he lost his wife, two sisters, an aunt and other relatives.

The national government sent no representative to the commemoration. President Aquino did not mention the event in a speech to media executives in Tagaytay City.

But even the relatives of most of the journalists killed in the attack did not go to the commemoration in Ampatuan town.

The Inquirer learned that the relatives of the journalists, most of whom were based in South Cotabato, decided to commemorate the event in General Santos City and in their homes because of continuing threat to their lives.

Their decision to stay away from Ampatuan proved to be a good one.

A motorcycle rigged with explosives was found on the highway leading to the massacre site, Sitio Isulan, shortly after 10 a.m.

Mangudadatu’s entourage took that route earlier on its way to the commemoration, but a second group of his relatives was delayed by the removal of the bomb-laden motorcycle.

“We believe the the bombs were intended for the [Mangudadatu] convoy, and we are investigating [to find out] who [is] behind the foiled plot,” Pido said.

He said a man was arrested at Sitio Masalay, the massacre site. The man was reportedly seen with Andal Ampatuan Jr., the principal suspect in the Maguindanao massacre, when the victims were shot to death three years ago, Pido said.

He did not identify the man, as the investigation was going on.

At the commemoration, Mangudadatu acknowledged that the principal suspects in the killings are already in government custody, but said that what matters most is their successful prosecution.

“Three years after, we are still waiting for justice,” he said.

Mangudadatu belied talk that he capitalized on the massacre to propel his political career.

“I would rather have a simple life with my wife and children than lose any of them,” he said.

He swatted aside suggestions that he should be held accountable for the deaths of the journalists because he used them for his personal interests.

The journalists, he said, were covering an important event, as it was only the first time that a serious challenger stood up against the Ampatuans.

Mangudadatu, who ran against Andal Ampatuan Jr. in the gubernatorial race, said nobody thought there would be violence during that event, especially with reporters around.

Bishop Colin Bagaforo, auxiliary bishop of the Archdiocese of Cotabato who attended the commemoration, appealed to the national government to expedite the trial of the killers so that justice could be served fast.

“We in the Church are joining all sectors in calling for justice for the victims,” Bagaforo said.

Student journalists in Southern Luzon also joined the call for justice for the massacre victims.

“Three years have passed and yet not one among the masterminds had been convicted. Our call is to our national government to speed up the resolution of this case,” said Michael Alegre, secretary general of the College Editors Guild of the Philippines in Southern Tagalog.

Mangudadatu said the henchmen of the Ampatuans roamed the province and worked to ensure the influence of their patrons would not be diminished.

“The [influence] of the massacre suspects here is still strong despite their arrest, because their contract assassins freely roam the province despite the imposition of a state of emergency,” Mangudadatu said.

He said the henchmen worked to make sure the people do the will of Andal Ampatuan Sr. and his sons, including their political choices.

“In the towns they control, we know the influence of Andal Ampatuan Sr., although he is already in jail. And if these people will not follow them, the family’s contract assassins may kill them,” he said.

Harry Roque, a private prosecutor in the trial of the suspects, said members of the Ampatuan clan had entered into an alliance with the Mastura clan.

But Maguindanao Vice Gov. Dustin Mastura, a nephew of Tocao Mastura, said by phone that there was no truth to reports of an alliance between his clan and the Andal senior-led faction of the Ampatuan clan.

“That is farthest from the truth,” he said.

Seventy-two members of the clan are reportedly running in next year’s elections, including nine for President Aquino’s Liberal Party.

But UNA denied on Friday that it had taken in any member of the Ampatuan clan.

Toby Tiangco, UNA secretary general, said he wanted to see certificates reportedly issued to Ampatuans so he could validate them.

“If indeed an Ampatuan charged in the massacre had been given an UNA [certificate], we will withdraw it immediately,” Tiangco said. Reports from Jerome Aning and Marlon Ramos in Manila; Delfin T. Mallari Jr., Maricar Cinco and Mar Arguelles, Inquirer Southern Luzon; Charlie Señase, Germelina Lacorte, Inquirer Mindanao; and AFP