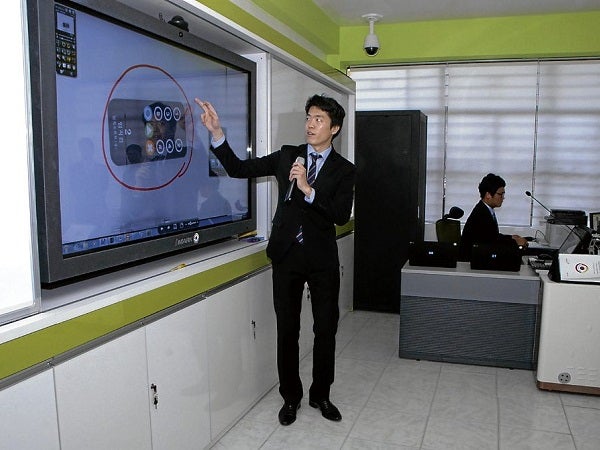 Parañaque National High School earned the distinction of having a classroom packed with cutting-edge technology, from a touch-screen “blackboard” to Wi-Fi-ready workstations for the students. The P20-million project was funded by the South Korean government. CONTRIBUTED PHOTO

It must be the perfect classroom for today’s tech-savvy generation.

The first full-scale information and communication technology (ICT)-based classroom in the country was recently unveiled in Parañaque City, a project realized with the help of South Korea’s Ministry of Education, Science and Technology (MEST).

In just a matter of days, an ordinary room in Parañaque National High School (PNHS) was transformed into a Wi-Fi-ready environment, the blackboard replaced with a 60-inch LCD touchscreen monitor capable of scrolling up images or playing audio-visual clips for customized multimedia lessons using a software called Lecture Maker.

The screen also comes with a wireless scanner and camera that can magnify book pages and other learning materials. One can also write on the screen itself over an uploaded image or video.

The teacher can operate the screen from a computer on his or her desk, and also control the 42 laptops provided to the students. The room also comes with a storage cabinet, built-in chargers, an emergency power supply system and a mounted camera that can record the teacher’s lecture. 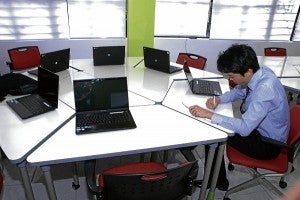 “This is the first (of its kind) in the Philippines. We do not have anything like this,” Education Assistant Secretary Jesus Mateo said on Tuesday during the turnover rites graced by a Korean delegation led by MEST Assistant Minister Kim Chong-Kwan.

Director Sun Hak Cho of MEST’s e-Learning Division’s Education Information and Statistics Bureau noted that the classroom—which cost about P20 million—was even “much better than many classrooms” in his home country.

“In education we had lots of trial-and-error. In the last few decades, we believe our ICT education is even stronger than those in developed countries. So we want to share what we have achieved,” Cho said of the project which was funded by the MEST under a memorandum of agreement with the Department of Education.

The Korean official said MEST brought in the latest hardware and software available to help the Philippines develop its own ICT-based classroom.

But he acknowledged that having a full-scale ICT classroom is not always necessary since it is not cost-effective. “But we are showing you everything and you can just test it,” he said.

With a student body of 11,169, the PNHS is now considered the biggest high school in Asia in terms of population. Before the MEST project, it already has 12 classrooms equipped with desktop computers and three computer laboratories.

The principal, Urbano Agustin, said an initial batch of 60 teachers will undergo a two-week training course on the use of the ICT classroom before sharing the know-how with the rest.

The school will see to it that the high-tech classroom will be used for all subjects and all students get to experience it, Agustin said. “I can already see it. They will learn a lot (and) it will be more fun.”