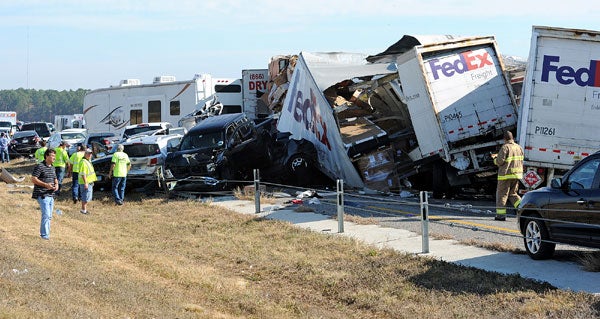 Cars and Trucks are piled on Interstate 10 in Southeast Texas Thursday. AP

BEAUMONT, Texas—Two people died and more than 80 were hurt when at least 140 vehicles collided on a Texas highway in dense fog, leaving trucks twisted on top of each other and authorities rushing to pull survivors from the wreckage.

The Thursday morning crash happened on Interstate 10 about 80 miles (128 kilometers) east of Houston.

Carroll said 80 to 90 people were transported to hospitals, with 10 to 12 of those in serious to critical condition. He said 140 to 150 vehicles were involved in the pileup. 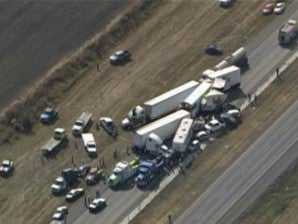 Carroll said the fog was so thick that officers didn’t immediately realize they were dealing with multiple accidents.

DPS trooper Stephanie Davis told KFDM that two people were killed in an SUV crushed by a tractor trailer. She said at least 100 cars and trucks were involved in the accident.

Davis identified the dead as Debra Leggio, 60, and Vincent Leggio, 64.

Carroll said uninjured drivers tried to help as authorities sorted through the wreckage.

“It’s just people helping people,” Carroll said. “The foremost thing in this holiday season is how other travelers were helping us when we were overwhelmed, sitting and holding, putting pressure on people that were injured.”