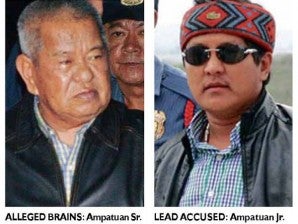 AMPATUAN, Maguindanao–Henchmen of Ampatuan clan members, who are accused of involvement in the 2009 Maguindanao massacre, continue to roam free and make sure the influence of their bosses do not diminish, according to Maguindanao Gov. Esmael Mangudadatu.

“The presence of the massacre suspects here are still strong despite their arrest because of their contract assassins, who freely roam the province despite the imposition of the state of emergency,” Mangudadatu said Friday on the third anniversary of the grisly killing of 58 people, including his wife Genalyn, other relatives and supporters, and 32 journalists, in Ampatuan town, Maguindanao on Nov. 23, 2009.

He said the henchmen made sure the people would follow the will of the detained Ampatuan members–particularly clan patriarch Andal Ampatuan Sr. and sons Zaldy and Andal Jr., the principal suspect–and their political choices.

“In the towns they control, we know the influence of Andal Ampatuan Sr. although he is already in jail. And if these people will not follow them, the family’s contract assassins may kill them,” Mangudadatu said.

Mangudadatu’s revelation came as private prosecutor Harry Roque claimed that members of the Ampatuan clan had allied themselves with the Mastura clan.

Mayor Tocao Mastura of Sultan Kudarat, Maguindanao is running in next year’s gubernatorial race against Mangudadatu.

Maguindanao Vice Gov. Dustin Mastura, a nephew of Tocao’s, said by phone that there was no truth to the reported alliance between his clan and the Andal Sr.-led faction of the Ampatuan clan.

“That is farthest from the truth,” he said.

The younger Mastura said if there was a politician who has been taking in members of the Ampatuan clan as allies, it was Mangudadatu himself.

“He was the one recommending Ampatuan clan members for membership into the Liberal Party, being the party provincial head,” Mastura said.

Mastura, however, agreed with Mangudadatu’s earlier statement that not all Ampatuans were involved in the massacre.

“So it is not wrong to become (an) ally with those not involved in the massacre. We can also have an Ampatuan for a candidate as long as he is clean,” Mastura said.

Mastura hinted that the detained Ampatuans still wield power despite the supposed involvement of its more influential members in the massacre.

“In one municipality for example, most residents are surnamed Ampatuan,” Mastura said.

He appealed against the conduct of witch hunt and to spare from persecution the people not involved in the massacre.

“The reality is being an Ampatuan or an opponent of the governor did not make anybody guilty of involvement in the massacre,” he said.

Mastura also warned against politicizing the Maguindanao massacre issue, saying what should be done is to serve justice to the victims and their kin as swiftly as possible. “The primary suspects are now in jail. What is left is to prosecute them for justice to be served,” he said.

Mastura said that as to politics, the performance of officials should become the people’s basis for electing them into office in next year’s elections.

“Let’s assess Toto’s (Mangudadatu’s nickname) performance for example. Has anything changed since he became governor in terms of governance and development? I guess none. The situation remains the same,” Mastura said.

As this developed, the Moro Islamic Liberation Front also denied coddling members of the Ampatuan clan suspected of involvement in the massacre.