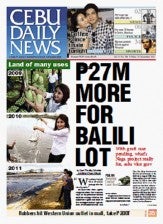 We didn’t visit the Balili property to steal goats.”

So said Vice Gov. Agnes Magpale about her surprise visit to the province-owned Balili lot in Naga which is the subject of a graft case filed in the Sandiganbayan against Gov. Gwendolyn Garcia and seven others.

Magpale said she wanted to know why P27 million was being spent for reclamation work in the site as told to her by Capitol engineer Adolfo Quiroga, what budget was being used and for what purpose.

“We were surprised to see the area still being developed. What is it really for?” she asked.

Magpale, who was accused by the governor of “trespassing” the area in her visit Wednesday with PB Member Arleigh Sitoy, said ongoing backfilling of anapog (limestone) in the 24.7 hectare site, which used to be largely underwater, had to be explained in budget deliberations which are about to begin in the PB.

The process should be conducted “with transparency,” she emphasized since she wasn’t aware of any budget item for this.

She said the governor sent word that Capitol department heads would be allowed to answer questions but only in a closed-door caucus of the legislators.

“No, it has to be open to the public,” Magpale told Cebu Daily New.

For four weekly PB sessions, Capitol department heads have refused to heed invitations to appear before the board. Magpale said this prompted her to visit the controversial Balili lot herself.

Engineer Quiroga heads the Provincial Planning and Development Office of the Capitol.

In previous reports of the Capitol’s purchase of a former beach resort and coastal land for P98.9 million, Governor Garcia said she wanted to use part of the property for an international port in Naga City.

She also brought news reporters on site to show how the land was also being cultivated with fruit trees and bangus fishponds.

Two coal ash ponds were later excavated and lined with plastic sheets as part of a 25-year agreement signed in July 2009 between Governor Garcia and the Korean Electric Company Kepco for the power firm to dispose of its coal ash waste in the Balili property at a price of $1 per metric ton.

For this, the Capitol applied for and was issued an Environmental Compliance Certificate (ECC) in 2010 by the Department of Environment and Natural Resources (DENR) for the construction of a “secured landfill facility” in 23.2 hectares to receive about 200 tons of coal ash waste daily.

A separate ECC and permit will have to be secured, however, to actually operate the facility.

Yesterday, Deputy Ombudsman for the Visayas Pelagio Apostol wrote to Tanodbayan Conchita Carpio-Morales to inform her that what used to be mostly submerged land in the Balili property is backfilled and covered with limestone.

“I’m asking the Ombudsman for any action on the matter, whether or not the reclamation (of the property) will affect the presentation of evidence for the prosecution,” Apostol told CDN.

He attached to the letter published reports of three Cebu newspapers on the Balili inspection.

“It’s premature for me to give my opinion. You just have to use your common sense on whether or not there is an intent to conceal (evidence),” he told reporters.

He said the original condition of the submerged parts of the Balili property before it was backfilled speaks for itself.

Last August, Governor Garcia and seven other persons were charged before the Sandiganbayan by the Ombudsman with two counts of graft and one count of illegal use of public funds for the Balili land purchase.

She denied the charge, calling it a politically motivated attack at a time when she had just announced her bid to run for the Senate. She later changed plans to run for a congressional seat in the 3rd district.

Critics await the issuance of a preventive suspension order as a matter of course, but Garcia has not yet been arraigned.

The other day, Governor Garcia and her brothe Rep. Pablo Garcia criticized the visit of Magpale and Sitoy to as a publicity stunt and questioned whether they were trying to influence the justices of the Sandiganbayan.

Congressman Garcia, who is running for governor, said filling the land with limestone cannot be considered “reclamation” since the term referred to the “filling of foreshore lands which don’t have titles.”

He called the ongoing work there “restoration” because they want to fill the foreshore land for titling purposes.

CDN checked a copy of the 2010 ECC for the project in barangay Tinaan, Naga. It describes part of the work there as “reclamation” that requires a permit from the Philippine Reclamation Authority.

It says the project for a “secured landfill facilitiy project” for 23.2 hectares includes “reclamation” and “landfill activities.”

For the coal ash pond, the ECC prescribes a thickness of five meters and a total volume of 710,027 cubinc meters to contain coal ash from Kepco Power Plant and limestone from legal quarry sources.

The coal ash pond, when completed, will have a lifespan of six years with a daily input or storage of 240.6 cubic meters of coal ash, according to the ECC.

In a press conference yesterday , Sitoy said the status of the land was part of the board’s budget deliberations.

“There’s nothing in the budget for the development of the Balili property. We wanted to know what was going on. If Engr. Adolfo Quiroga had answered our call, we wouldn’t have gone to Balili,” Magpale said.

The vice governor said they waited one month for Quiroga to appear before the board to no avail “so we decided to go ourselves.”

“We went there is in the interest of protecting the taxpayer’s money. We went there because of our efforts to be transparent and to protect the people’s money,” Magpale added.

She said she was surprised by the governor’s accusations that they were “trespassing” without permission from her office.

Sitoy, who arrived 30 minutes ahead of Magpale in the Balili property, said he was served food and drinks by the guards and even given a tour of the property.

“In other words, there was no forcible entry”, Magpale said.

Staff members took photos to be presented in the next PB meeting.

“Let me make this clear, the issue of the acquisition of Balili is already addressed. It is with the Sandiganbayan. What we went there for was to see the subsequent developments in the area,” Magpale said.

Governor Garcia criticized Magpale for having a “senior moment” in forgetting that she was one of the officials who approved the 2008 acquisition of the Balili property.

Magpale yesterday pointed out that she was not charged before the Sandiganbayan.

“I submitted myself to the scrutiny of the Ombudsman. But I wasn’t a signatory in the amended memorandum since I was out of town,” Magpale clarified, referring to an amended PB resolution authorizing Governor Garcia to purchase the Bailil estate.