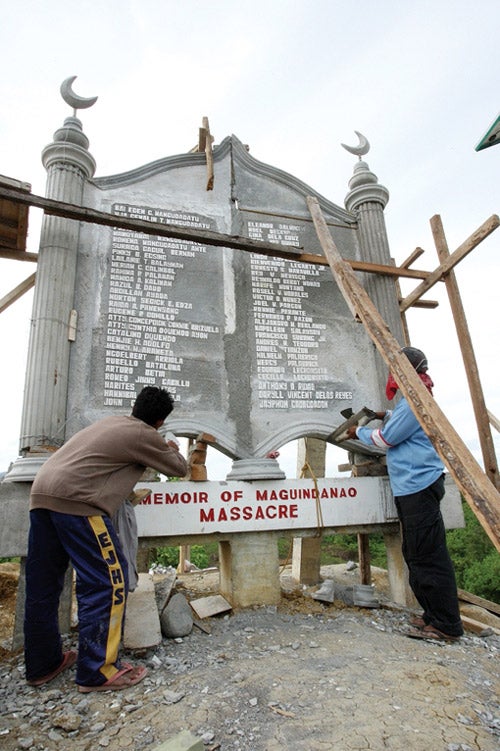 MEMORIES THAT WILL NOT DIE Workers put finishing touches to a shrine where 58 Filipinos, most of them journalists, died in the infamous Maguindanao massacre. JEOFFREY MAITEM/INQUIRER MINDANAO

Nov. 23, 2009- At least 21 people, including 13 women, were found dead in Maguindanao in what was considered the most gruesome political massacre in the country’s history.

The victims were in a group that included some 20 other women and accompanied by over 30 journalists. They were heading to the Comelec provincial office in Shariff Aguak town to file Buluan Vice Mayor Esmael “Toto” Mangudadatu’s certificate of candidacy for governor of Maguindanao.

(Mangudadatu belongs to a clan that was once allied, but had a bitter falling out with the Ampatuans. Mangudadatu was running for the post held by Gov. Andal Ampatuan Sr., and against Ampatuan’s namesake son and Unsay town mayor.)

Nov. 24, 2009 –Malacañang called the mass murder “an incident between two families in Mindanao” which had “nothing to do with President Macapagal-Arroyo or the administration.” The Ampatuans are known allies of Ms Arroyo.

Nov. 25, 2009 – Death toll rose to 57 as more bodies were unearthed from a hilly village. Lawmakers filed resolutions calling for an inquiry into the mass murder while the United Nations deplored the massacre. Also, journalist groups named the Philippines as the most dangerous place for journalists, leapfrogging Iraq.

Nov. 26, 2009 – Andal Ampatuan Jr. was placed in government custody. He insisted that he was not guilty. The military said the 57 dead included 30 journalists and up to 15 motorists who happened to drive past as the convoy was stopped by the gunmen.

Nov. 27, 2009 – State prosecutors recommended the filing of murder charges against Ampatuan Jr. while Mangudadatu filed his certificate of candidacy for governor of Maguindanao.

Dec. 6, 2009 – Sixty-two arrests were made including those of the Ampatuan patriarch and his four sons.

Dec. 8, 2009 – The Supreme Court granted DOJ’s request that the murder cases be transferred from Cotabato City to Quezon City.

Dec. 9, 2009 – Witnesses said Andal Ampatuan Jr. shot the bodies one by one with his baby Armalite to make sure they were all dead.

Dec. 11, 2009 – Multiple murder charges were filed against 100 new suspects who were members of the Civilian Volunteer Organization loyal to the Ampatuan clan

Dec. 28, 2009 – The Ampatuan sons submitted their counter-affidavits, denying they had a hand in the massacre.

Jan. 12, 2010  – The Supreme Court granted the DOJ’s motion to transfer the rebellion case against the Ampatuans to Quezon City.

Jan. 27, 2010 – Mangudadatu testified, saying Palace officials knew of Anjal Ampatuan Jr.’s violent nature and dissuaded him from challenging Ampatuan Jr. in the race for governor in the May elections.

Feb. 9, 2010- Ampatuan Jr.’s lawyer filed a motion asking Reyes to inhibit herself from the case; hearing was deferred to Feb. 24.

March 9, 2010 – A new witness named “Jesse” spoke to reporters saying he was one of the designated gunmen in the massacre. He wanted “to tell the truth” and wanted Andal Jr. and Datu Kanor behind bars. Kanor, vice mayor of Salibo, has been charged as a primary suspect by the DOJ.

March 29, 2010 – Citing lack of evidence, the Quezon City Regional Trial Court dismissed the rebellion charges against Andal Ampatuan Sr. and six other members of his clan.

April 17, 2010 – Acting Justice Secretary Alberto Agra said Zaldy and Akmad Ampatuan would be dropped from the list of those accused.

April 21, 2010 – The Palace directed Agra to review his decision with state prosecutors.

April 26, 2010- Agra continued to defend his controversial decision and dismissed allegations that he was paid to clear the two Ampatuans.

Sept. 1, 2010 – Judge Jocelyn Solis Reyes delayed the hearing. Relatives of the deceased accused the judge of favoring the motions of the defense.

Sept. 8, 2010 – Trial reopened; Lakmudin Saliao, a house help of the Ampatuans, testified that the Ampatuan clan planned the massacre over dinner on Nov. 17, 2009.

Oct. 7, 2010 – The Court of Appeals denied Zaldy’s motion that it instantly resolve his earlier petition to reverse DOJ’s resolution reinstating him as an accused in the case.

Nov. 17, 2010 – President Aquino joined calls for the Supreme Court to allow live coverage of the trial.

Nov. 23, 2010 – The nation marked the first anniversary of the Maguindanao massacre. Mr. Aquino said that giving justice to the victims was on top of the government’s list.

Jan. 31, 2011 – The Court of Appeals junked Zaldy’s plea to be excluded from the charge sheet.

May 3, 2011 – Judge Solis-Reyes denied the request of Andal Ampatuan Sr. for hospitalization but ordered a doctor to check the medical complaints of the accused.

June 1, 2011 – More than 18 months after the massacre, Ampatuan Sr.’s arraignment took place. He pleaded not guilty to charges of masterminding the mass murder.

June 14, 2011 – The Supreme Court favored the live coverage of the Maguindanao massacre trial.

July 7, 2011 – The lawyers of Zaldy said their jailed client was no longer planning to turn state witness to pin down his father and brother.

July 11, 2011 – In an interview aired on TV, Zaldy said he would be willing to testify and speak the truth, even if his testimony would involve his father and brother.

July 21, 2011 – The Court of Appeals denied Andal Ampatuan Sr.’s bid to be excluded from the list of respondents in the Maguindanao murder case.

Nov. 23, 2011 – On the second anniversary of the brutal killing, relatives of victims attended the trial and called on the court to fast-track the case.

March 9, 2012 – Andal Ampatuan Sr. was rushed to a hospital after vomiting blood.

March 23, 2012 – Ampatuan Sr. was back in jail after the court ordered his discharge from a military hospital where he was confined for two weeks.

July 6, 2012 – Judge Solis-Reyes said she was hoping to hand down the verdict before the end of Mr. Aquino’s term, reacting to public criticism on the slow pace of the trial.

Sept. 26, 2012 – Inquirer reported that DOJ formally recognized Reynaldo Momay, a photojournalist from General Santos City as the 58th victim of the Maguindanao Massacre.

Oct. 23, 2012 – The Supreme Court reversed its ruling allowing the live broadcast of the trial, explaining the need to protect the rights of the accused as well as the witnesses.