PAWS gets about 40 reports of animal abuse daily | Inquirer News

PAWS gets about 40 reports of animal abuse daily 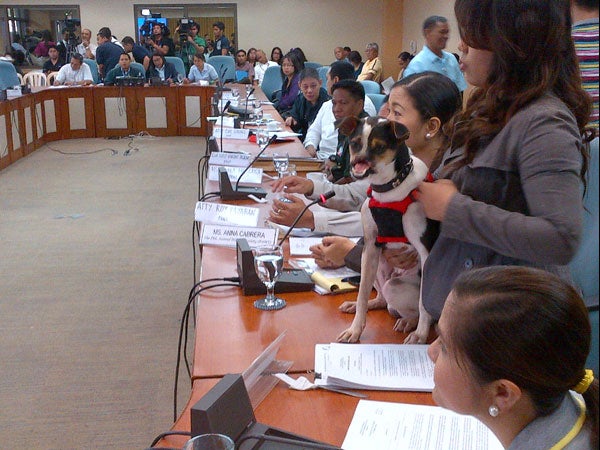 An animal welfare advocate presents Wacku to members of the House committee on revision of rules. KAREN BONCOCAN/INQUIRER.net

MANILA, Philippines –The Philippine Animal Welfare Society has monitored about 100 cases of animal cruelty in the country this year, many of which are ignored due to the lack of stiff penalties against animal abuse.

PAWS executive director Anna Cabrera told reporters at the House of Representatives Wednesday that her organization receives daily an average of 40 calls on cases of animal abuse.

“Half of these are valid cases of animal cruelty and neglect,” said Cabrera.

Wacku, a dog who lost its upper snout to a drunken man’s ‘bolo’, was presented to the House committee on revision of rules as an example of grave cases of humans’ cruelty to animals.

“Humans go confident (when abusing animals) because there are no consequences. Bihira ang nakukulong kahit marami nang kaso (of animal cruelty),” she said.

House Bill 5849 seeks to put violators of the animal welfare law behind bars for six to 12 years and to increase the fine to  P10,000. RA 8485 only imposes six months to two years jail time and fines of only up to P5,000 for offenders. It also wants to prevent violators from owning pets.

She sought the involvement of police officers in implementing the law against animal cruelty and neglect once RA 8485 has been amended “so that we take (this law) seriously.”

Dy said that she was now preparing to lead lawmakers in a technical working group to discuss the penalties they want imposed against animal abuse.

“First reading na ito and then we will consolidate the bills sa TWG. It really depends kung gaano kabilis kami sa TWG. But I’m still hopeful that we can pass this,” she added.