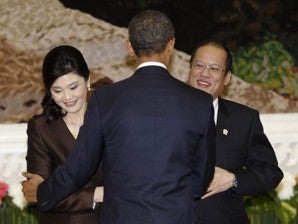 PHNOM PENH—As the show of unity within the Association of Southeast Asian Nations appeared to crumble, US President Barack Obama on Tuesday urged Asian leaders to rein in tensions, saying there was no reason to risk an escalation of their territorial disputes.

Speaking at the 21st Asean Summit, Obama stopped short of firmly backing allies Japan, the Philippines and Vietnam in their disputes with China over a cluster of isles historically called the South China Sea and which Manila refers to as the West Philippine Sea.

“President Obama’s message is there needs to be a reduction of the tensions,” Deputy National Security Adviser Ben Rhodes said after the summit in the Cambodian capital Phnom Penh.

“There is no reason to risk any potential escalation, particularly when you have two of the world’s largest economies—China and Japan—associated with some of those disputes.”

Obama’s message came at the end of a three-day trip to Thailand, Burma (Myanmar) and Cambodia in a visit that underlined the expansion of US military and economic interests in Asia under last year’s so-called “pivot” from conflicts in the Middle East and Afghanistan.

On Monday, Philippine President Aquino said the United States had a strategic role to play in keeping the peace in Southeast Asia.

“It is especially vital to have the world’s largest national economy involved in the discussions considering the interconnectedness of our current milieu,” he told an audience that included Obama and other Asean leaders.

Everyone has a stake

Mr. Aquino’s call came after he openly rebuked host Cambodia’s Prime Minister Hun Sen for saying a consensus had been reached not to “internationalize” the territorial disputes.

China has long insisted that the disputes should be resolved through bilateral talks and opposed the involvement of outside parties, such as the United States. The Philippines is pushing for a multilateral solution.

Addressing the Asean-US leaders meeting, one of the side summits here, Mr. Aquino said the United States had a role to play in the discussions, especially in light of its touted “pivot” to the Pacific to check China’s growing military assertiveness.

“Each one of our nations has a stake in the stability of Southeast Asia. The United States understands this and, for this reason, has chosen to work with us to ensure the peace and continuous advancement of our region,” Mr. Aquino said.

He said US presence in the Asean summit “adds a special dimension to our regional discussions, particularly on issues that have far-reaching political and economic implications.”

“Our region is very diverse and its harmony can easily be disrupted by sheer political, military or economic might. Imbalance, as we know, may lead to instability,” he said.

“While we are all aware that the US does not take sides in disputes, they do have a strategic stake in the freedom of navigation, unimpeded commerce, and the maintenance of peace and stability in the South China Sea,” Mr. Aquino said.

He said territorial and maritime disputes should be settled peacefully and in accordance with the rule of law.

At a briefing for the Philippine media, Mr. Aquino said the United States, as the biggest economy, should not be left out of the talks considering its own stake in the region.

“We recognize that they also have a right to say their piece and to be active in advancing also their interests. We have long said that if it’s a multilateral problem, you can’t have a bilateral solution,” he said.

Earlier on Monday, at a separate Asean-Japan summit, Mr. Aquino made a terse interjection after Hun Sen said there  was now an Asean consensus to keep negotiations within an “Asean-China framework.”

Mr. Aquino raised his hand to object, saying, “the Asean route is not the only route for us.” He also said the Philippines, as a sovereign state, had the right to defend its national interest.

Relations between Cambodia and the Philippines turned frosty after the  Asean foreign ministers meeting in July when they tussled over the language of a joint communiqué supposed to be issued at the end of the talks.

Cambodia rejected any mention of the disputes of individual Asean states with Beijing, particularly Panatag Shoal (Scarborough Shoal), which was then at the center of a maritime standoff between Manila and Beijing.

The deadlock prevented the issuance of a joint communiqué at that meeting, and critics said Cambodia was acting under pressure from China, which did not want any references to the sea disputes in the statement.

Asean members Vietnam, the Philippines, Brunei and Malaysia, along with Taiwan, have overlapping claims in the West Philippine Sea, which is believed to hold vast deposits of oil and gas.  China claims virtually the whole body of water.

In April, a protracted standoff occurred between Chinese and Filipino forces over Panatag Shoal off Zambales.

Speaking at the summit Tuesday, Mr. Aquino  called on all parties to respect the exclusive economic zone (EEZ) of coastal states, “irrespective of their size or naval power,” in conformity with the United Nations Convention on the Law of the Sea (Unclos).

The President called on all the claimant countries in Asean to “consider coming together to begin discussing the clarification of maritime claims and the resolution of their maritime disputes.” He said this should be done in accordance with international law, especially Unclos.

The Unclos sets the EEZ to up to 370 kilometers (200 nautical miles) from the coast in which states have the right to explore and exploit natural resources but allow freedom of navigation and overflight to others.

“At no time in the contemporary history of the South China Sea has clarification and delimitation of maritime areas become more urgent and imperative than they are now,” Mr. Aquino said.

Mr. Aquino also emphasized that all parties to the proposed code of conduct (COC) in the South China Sea, when finalized, must be committed to its full implementation.

“As we in Asean embark on negotiating a code of conduct, we must make sure that its provisions are not only stronger, binding and credible, but that all parties to the COC must be fully committed to its implementation,” he said.

Mr. Aquino told reporters earlier that Asean had taken a significant step forward in the drafting of the code of conduct that would guide talks on the territorial disputes with China.

Aside from the Philippines, Vietnam and Singapore have pushed their neighbors to “formalize the talks that will formulate the COC,” he said.

Mr. Aquino said he considered this a major development that contrasted with the slow progress of talks since the signing of the Declaration on the Conduct of Parties in the South China Sea, or the DOC, a nonbinding pact entered into by the claimants in 2002.

In the Asean, the rule is not by majority, but by consensus, he said. “If even one objects, there’s no consensus.