Time to act more like a President, Aquino urged 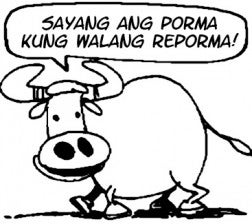 According to consultant Peter Wallace, head of The Wallace Business Forum, President Aquino deserves high marks for his administration’s consistent fight against graft and corruption that has enhanced business confidence and made him a highly popular leader.

But much more needs to be done if the Philippines is to break through the poverty trap, and unfortunately, Mr. Aquino does not seem committed and enthusiastic enough to see these needed reforms through, putting his considerable political capital to waste, Wallace said.

According to Wallace, Mr. Aquino’s consistently high net satisfaction rating—at 68 percent as of end-August, according to the Social Weather Stations—has made him a very popular figure, and that popularity translates into coveted political capital.

“President Aquino can use that political capital to make tough, unpopular decisions. Why doesn’t he?” Wallace said at yesterday’s meeting to mark the business forum’s 30th anniversary.

Wallace said during his presentation to business and government leaders that Mr. Aquino should realize that leadership was a full-time job, not just from 9 a.m. to 5 p.m.

“It is time for him to do two jobs. He is the President, not P-Noy,” Wallace said.

According to the group’s latest Quarterly Perception Survey, while 68 percent of respondents said the President was doing a good/excellent job and that he was making tough decisions needed for reforms, 41.7 percent said the efforts “were not enough.”

There were also respondents who said the President was only giving  a “moderate effort” to support business and only “somewhat” aggressive in pushing for reforms needed to improve business conditions.

Wallace recommended that Mr. Aquino exercise his considerable political will to  get vital infrastructure built; spend the money the budget department had disbursed to spur economic growth; resolve the open-pit mining ban that had put a damper on mining activity; and upgrade the air safety ranking of the Philippines.

It is also important to quickly resolve the Maguindanao massacre case and other cases of extrajudicial killings.

“Except for a couple of changes, the political will to get things done is lacking,” Wallace said.

Wallace, however, said that despite some shortcomings, business confidence and optimism that weren’t there under former President Gloria Macapagal-Arroyo were now present and policy changes had taken place.

Bidding for government projects is now more transparent and competitive; handling of government-owned and -controlled corporations has been reformed; the budget for the conditional cash transfer (CCT) program has increased; and pocket open skies has been implemented, allowing airlines to freely land in airports outside Metro Manila.

Wallace also cited the improvement in the ranking of the Philippines in the Global Competitiveness Report of the World Economic Forum by 22 places since 2009; an improvement in the ranking of the Corruption Perception Index; the record jump in the stock exchange composite index by 64 percent from the time Aquino came to power; credit rating upgrades; the increase in tourist arrivals; and an increase in rice output.

Improvements in the business environment, however, have been found wanting. The Philippines does not rank high in  ease of starting a business, global perceptions and trade logistics.

“It is business that is not getting the attention needed,” said Wallace.

This is reflected in part in the trickle of foreign direct investment (FDI). The Philippines so far only recorded $2.3 billion worth of FDI from 2011 to the first half of 2012, compared to

Mr. Aquino is doing more reforms on the social front.

Wallace said the successful impeachment of Chief Justice Renato Corona had “strengthened him considerably” and that “could be the beginning of a true cleanup of many other scandals by his many other people.”

Wallace, however, stressed that sustaining the high approval rating could not be ensured as there were many factors that could bring it down.

These include the rise of hunger and poverty incidence; failure to address unemployment; disappointing implementation of the flagship public-private partnership (PPP) program; failure to address the Mindanao power shortage; and the defeat of administration candidates in the 2013 senatorial elections.

Former President Fidel Ramos, who was the guest of honor at the meeting, offered similar “unsolicited” advice to President Aquino, saying a president should work 25/8 and not just 24/7 because of the demands of the job.

“You have to juggle 10 balls at the same time and make sure that you do not drop any,” the 84-year-old Ramos said. “You have to do multitasking and you have to go down to the grassroots. You also have to market our economy abroad. That is my humble suggestion. At this point, it is take it or leave it.”

Ramos told the Inquirer that Filipinos should rally around Aquino to make sure he succeeded.

“The way I look at it, he is the skipper of our one and only ship, the MV Pilipinas, and we are all on board. So we must help the skipper and the crew,” Ramos said. “First we have to make sure the ship is seaworthy and going in the right direction and then strong enough to compete against other ships.”

Ramos said he would like Mr. Aquino “to act like a skipper and lead by example” as he seemed to be lacking in terms of motivation and commitment.

He said, however, that he was confident and optimistic about the country’s prospects under

Mr. Aquino. “Kaya natin ito! (We can do this),” Ramos said, flashing his familiar thumbs-up sign.