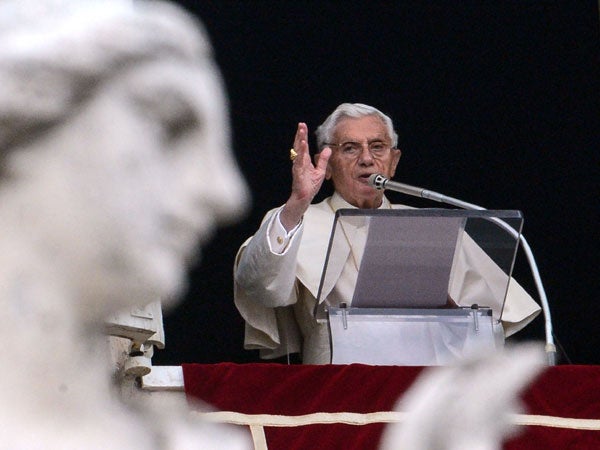 Pope Benedict XVI blesses faithfuls from the window of his apartment during his Sunday Angelus prayer in St. Peter’s square at the Vatican on November 18, 2012. Pope Benedict XVI on November 18 expressed “Dear friends, even in our times there are natural disasters, and unfortunately even wars and violence.Even today we need a stable foundation for our life and our hope, the more so because of relativism in which we are immersed. ” . AFP / ANDREAS SOLARO

VATICAN CITY—Pope Benedict XVI called on Christians Sunday not to heed doomsday warnings that the world will end on December 21.

During his weekly Angelus address from the window of his Vatican apartments on Saint Peter’s Square, Benedict spoke of extracts from the bible which speak of “the sun and moon going out, the stars falling from the sky.”

Several films and documentaries have promoted the idea that the ancient Mayan calendar predicts that doomsday is next month, on December 21, 2012.

But Benedict said that Jesus “does not describe the end of the world, and when he uses apocalyptic images, he is not acting the prophet.

“On the contrary, he wants to stop his disciples of every epoch from being curious over dates, forecasts, and wants to give them the key to… the right road to walk today and tomorrow to enter into the eternal life,” he added.

As many as 90,000 people are expected to attend a massive event in Guatemala City on December 21, just in case the world actually does end, while tour groups are promoting doomsday-themed getaways.