Over 10,000 gun licenses in Eastern Visayas have expired | Inquirer News

Over 10,000 gun licenses in Eastern Visayas have expired 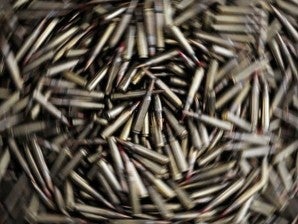 TACLOBAN CITY, Philippines—The Philippine National Police’s regional office in Eastern Visayas is calling on the owners of more than 10,000 registered firearms to renew their licenses.

The owners of firearms with expired licenses have until Dec. 31, 2012 to renew their permits, Soria said on Friday.

Soria said that while they could monitor registered firearms with expired permits, the police could not monitor firearms in the hand of criminals and New People’s Army rebels.

An estimated 558 unlicensed or loose firearms were in the possession of the New People’s Army  in Eastern Visayas based on a report from the Philippine Army, he said.

According to reports from various police stations in Eastern Visayas, another 3,000 loose firearms were in the hands of criminal elements, Soria said.

“We are intensifying our campaign on the proliferation of loose firearms in the region in the light of the forthcoming elections next year,” Soria said.

When used in committing crimes, loose firearms, which are difficult to trace, would make it difficult for police to solve crimes, he added.

As part of their campaign against loose firearms, Soria said, the police would be setting up checkpoints and would apply for search warrants with respect to people suspected of having unlicensed firearms.

Meanwhile, seven elective officials in Eastern Visayas have applied for security detail reportedly due to security threats on their lives, Soria said. They include a governor, a congressman, a vice governor and four mayors, three of them from Samar and one from Northern Samar.

Soria would not, however, identify the officials by name, saying the authorities were still evaluating the applications.

Upon the approval of the applications, two security escorts either from the Philippine National Police or the Philippine Army would be assigned to them, he added.

Aside from the official security detail provided by the PNP, Soria said, politicians are entitled to hire up to four additional security escorts from a private security agency.  More than that would be considered a private army, he added.