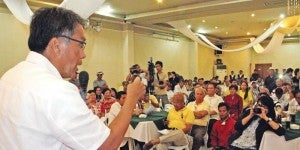 Interior Secretary Manuel Roxas on Tuesday assures victims of a multibillion-peso pyramid scam in Pagadian City that the government will run after the perpetrators of the scheme. RICHEL V. UMEL/ INQUIRER MINDANAO

PAGADIAN CITY, Philippines—Aman Futures Group Philippines Inc., which claimed to be involved in the arcane business of commodity futures trading, operated in the most unusual of places: in the declining mangrove area of the coastal village of  Kawit here.

The company, which declared a Pasay City location as its principal business office, rented a fenced residential compound beside the main road that is being developed as an alternate route to the Pagadian airport.

Its immediate neighbors were mostly urban poor folks whose economic life revolves around fishing and providing manual labor in various jobs in the city center, which is over a kilometer away.

Aman Futures formally opened its doors to the public last February.  At that time, it had a pending application for registration with the Securities and Exchange Commission.

Instead of having a grand launching to attract the attention and interest of the moneyed, it rolled out investment invitations among its poor neighbors.

Various investors interviewed by the Inquirer all said the company, from the very start, postured as some kind of “economic messiah” by assuring “very nice returns for the investments of the poor people” of Kawit.

“This is the reason why many people still believe the scheme was really intended to help the poor,” said Generoso Bayawa Jr., a local government employee who lost money in the scam.

In Kawit, new houses rose in the immediate vicinity of the Aman Futures office, evidence of their windfall. But residents in the neighborhoods farther away,  middle class families, mostly have tales of losing in the investment racket.

“By that, you can tell that Aman’s neighbors were the early birds because they got the windfall,” said Bayawa.

The company also had varying answers to questions about how it raised revenues to fund its promised returns. But the usual answers the people got were that the company was involved in the petroleum, mining, stock trading, and oil palm businesses.

In one conversation, when the capacity of Aman Futures to pay out the investments was questioned, one Kawit resident recalled that its employee retorted that “Amalilio is surely far richer than most of us because he earns money ‘round the clock.”

The first flocks of investors were fish vendors and motorcab drivers. Sources said that later, a Christian denomination became a major group of investors after Amalilio  promised its  leaders to help them build a church and fund mission work.

To place an investment, one had to fill up an investor registration form, show an indentification card, and then line up for processing.

There were four transaction windows manned by tellers, just like in a bank, the investors said.

The transactions were classified into first-time investments, add-on, reinvestment, and cash out.

Registration was required for first-time investors. Add-on referred transactions in which investors  put in more money to a placement plus interest that became due and demandable. Reinvestment is when the entire placement, including interest, is plunked in for a new investment term.

Cash out was classified into “cash out all,” meaning the entire placement and interest due is withdrawn, and “partial cash out” when only a portion of the entire amount due is taken and the balance plunked in for a new investment term.

At first, registered investors were advised to deposit cash to certain bank accounts maintained by Aman Futures. The deposit slip would then  be brought to the Kawit office so that one’s investment could be formally recorded.

Aman Futures then issued a receipt acknowledging the investment placement and handed out a post-dated check that could be exchanged for cash on a date corresponding to the time one’s returns are due.

The practice of issuing post-dated checks was later scrapped “obviously to avoid a paper trail that can be used for legal pursuits,” said Mercedes Lourdes Quisumbing, president of the Pagadian City Chamber of Commerce and Industry.

Quisumbing related that she first stumbled on the racket in mid-February when she noticed a throng of fish vendors depositing money at a local bank.

“I thought  at first  that the swelling customer volume was a result of a good marketing program until someone from the bank told me the real score,” she said.

Bayawa, who holds a banking and finance degree and  started investing in May, said the interest rate for 8-day placements peaked at 41 percent.

Interest rate for 14-day placements peaked at 86 percent when it dished out a “Ramadan special” during last week of July. The 20-day placement, which was mostly offered toward the time the scheme collapsed, pitched a high of 67 percent.

When it started, there was only a designated day of the week when Aman Futures took in investments. It then opened its doors the next week for the cash out. But later, as more people were interested in investing their money, transactions became daily.

Quisumbing said that based on her study of the racket as early as March, she concluded that it was a Ponzi scheme. She then alerted the local government and the Department of Trade and Industry.

Quisumbing explained that she examined the earnings potential of various securities investments and compared these with the offered return of Aman Futures. This was to determine Aman’s capability to give as much interest, assuming the company really invested in these securities, she added.

But the offered rates of return were unbelievable, she said.

As early as April, the DTI already warned the public, through the local radio stations, against placing investments with Aman Futures.

But this fell on deaf ears. Instead, Aman Futures’ volume of business radically shot up; longer queues of people were seen outside its Kawit office.

“Those who lost in Coco could have wanted to recoup their losses through Aman,” she said.

At its height from May to August, people started lining in Kawit for the first-come-first-served opportunity as early as 1 a.m.

This was also the time when former fish vendors and motorcab drivers were already seen driving SUVs.

On a vacant lot near the Aman Futures office, a  tent was set up for waiting investors. Small business activities mushroomed, such as food stalls, chair rentals, comfort room service.

As investment solicitations grew, the company hired security personnel, especially to manage the long queue of people. At least five police personnel were also regularly stationed in the area.

Sources said the policemen earned allowances of P2,000  each from Aman Futures.

By this time, the banks no longer allowed deposit transactions for Aman Futures, forcing the company to take on this phase of its operations, bringing in huge crowds to its Kawit office.

Quisumbing supposed that valued clients of banks could have called their attention to the delays this was causing them.

She added that sources in the banking community said the money deposited in the account of Aman Futures did not stay long; it was withdrawn from somewhere in the country.

As the queues grew denser and the waiting time longer, accidents happened, such as the deaths  of an old woman who suffered heat stroke and a man with kidney ailment, said Bayawa.

“These are incidents that Aman Futures successfully covered up,” he added.

Amid the investment frenzy, it was striking that Aman Futures was able to instill some “discipline of silence” among its investors.

Those who complained about whatever issues inside the Kawit office were threatened with being “washed out” as investors. This meant being forced to cash out all placements, including interest, and then being barred from making new placements.

“The prospect of losing the opportunity to earn more money scares the people. This should explain why many of them are still mum about the scam, thinking they can still recover their investment losses,” Bayawa explained.