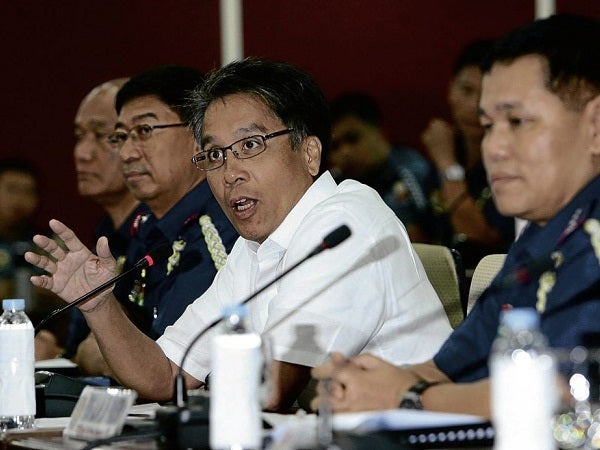 2 PNP CHIEFS. Interior Secretary Mar Roxas says he is considering help from Muslim groups in Mindanao to ensure peaceful elections next year. Roxas is speaking at a news conference in Camp Crame with PNP chief Nicanor Bartolome (to his right) and PNP deputy director Alan Purisima (to his left). MARIANNE BERMUDEZ

Fifteen provinces considered “high-risk” areas for election violence will get special attention from the Philippine National Police three months before the start of the campaign for the May 2013 midterm elections.

The 15 provinces are traditional hot spots during elections.

Interior Secretary Manuel “Mar” Roxas II told reporters on Friday that the 15 provinces would get priority in the security preparations for next year’s elections, as they posed the biggest problems, including private armed groups, loose firearms, threat groups, criminal groups and intense political rivalry.

“We now start operations in these 15 provinces to address the risk of [election] violence,” Roxas said in a news conference to launch the Task Force Safe and Fair Elections (SAFE) 2013.

In Maguindanao, where 58 people, including 32 journalists, were brutally killed on Nov. 23, 2009, in the worst election-related violence in the country, the PNP has identified four private armed groups. There are about 4,000 loose firearms in the province, the PNP said.

The PNP has reported 27 election-related incidents so far, with six public officials killed.

Bartolome said PNP teams would round up firearms whose licenses had expired. Carrying search warrants, the teams will go to the last known addresses of the owners of those firearms, Bartolome said.

The PNP said the licenses of 552,338 firearms had not been renewed, making them loose firearms.

The PNP said at least 25,065 firearms, mostly handguns, were in use but never registered.

Instead, the government will go after the armed groups to deprive politicians of the services of such groups, Roxas said.

“What can they (the politicians) do if there are no more armed groups?” Roxas said.