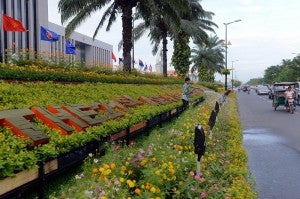 A Cambodian worker sprays water on flowers in front of the Peace Palace, the place for the 21st Association of Southeast Asian Nations (ASEAN) summit and Related summits in Phnom Penh on November 15, 2012. US President Barack Obama is set to wade into the troubled waters of Asia’s maritime disputes at a regional summit next week, with allies hoping for support in their efforts to contain China. AFP PHOTO / TANG CHHIN SOTHY

PHNOM PENH, Cambodia — Southeast Asian leaders plan to adopt a human rights declaration aimed at fighting torture and illegal arrests in a region notorious for violations, despite criticism that the pact falls short of international standards.

Leaders of the Association of Southeast Asian Nations are scheduled to formally adopt the ASEAN Human Rights Declaration on Sunday during the group’s annual summit in Cambodia, according to diplomats and documents obtained by The Associated Press on Thursday.

ASEAN leaders would commit to promote and protect human rights, along with “democracy, rule of law and good governance” in a joint statement they would sign to launch the declaration. But provisions in the draft say rights could be limited for reasons of security, public order and morality, exceptions that were criticized by rights groups.

The bloc’s human rights commission, which drafted the declaration, would work for “the full realization of human dignity and the attainment of a higher quality of life for ASEAN peoples,” the leaders would pledge in their statement.

Founded in 1967 as an anti-communist bloc in the Cold War era, ASEAN has taken feeble steps to address human rights concerns in the vast region of 600 million people, adopting a charter in 2007 where it committed to uphold international law and human rights but retained a bedrock principle of not interfering in each other’s internal affairs — a loophole that critics say helps member states commit abuses without consequence. In 2009, the group unveiled a commission that was tasked to promote human rights but deprived of power to investigate violations or go after abusers.

ASEAN diplomats have called the declaration a milestone in the region despite its imperfections, saying it will help cement democratic reforms in countries such as Myanmar, which until recently has been widely condemned for its human rights record.

Philippine diplomat Rosario Manalo, a key proponent, says it is significant that the region’s less democratic governments have embraced the declaration, which could have been torpedoed by any ASEAN member. The 10-nation group decides by consensus, meaning that even one objection could block a majority decision.

“It’s not perfect but it’s a new benchmark for ASEAN,” Manalo said.

However, more than 60 international rights group urged ASEAN leaders to postpone the adoption of the declaration and have it redrafted to correct flaws, including the removal of provisions that could limit rights in the name of “national security” or “public morality.”

Phil Robertson of New York-based Human Rights Watch said the declaration “as written, does not meet international human rights standards and may, we fear, be used by ASEAN governments to justify violating rights.”

It adds that the “realization of human rights must be considered in the regional and national context bearing in mind different political, economic, legal, social, cultural, historical and religious backgrounds.”

Some of the groups welcomed the declaration’s opposition to rights violations such as human trafficking. It outlines many of the civil and political rights in the Universal Declaration of Human Rights, including prohibition of torture, arbitrary arrest and child labor.

The ASEAN summit comes as the group has been set back by a rift over how to handle territorial disputes in the South China Sea involving four of its members and China.

The long-simmering disputes are expected to be in the spotlight during the ASEAN meetings. President Barack Obama is to attend an East Asian Summit at the end of the meetings next week.