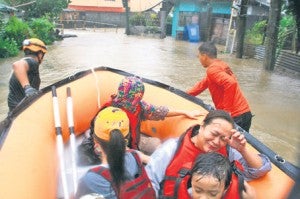 Legazpi City, Albay, Philippines—Floods reaching up to the rooftops killed nine people and forced thousands of residents to flee their homes in a two-day sweep through the Bicol provinces, relief officials said on Tuesday.

The waters swallowed parts of Albay, Camarines Sur, Camarines Norte and Catanduanes provinces which were hardest hit by winds and rains from the approaching Tropical Storm “Juaning.”

Juaning intensified into a tropical storm Tuesday, prompting the weather bureau to raise Signal No. 2 in 18 provinces, as well as Metro Manila.

The storm, packing winds of 75 kilometers per hour that gust up to 90 kph, has brought 300 millimeters of rains the past two days in the affected Bicol provinces, said Bernardo Alejandro, head of the Office of Civil Defense for Bicol.

Three people were killed by landslides in Gabon and Polangui towns, two were killed by a falling coconut tree in Pio Duran town, while one was electrocuted and another drowned in Daraga town, all in Albay province, according to Albay Gov. Joey Salceda, who has a zero-casualty policy during calamities.

A school teacher drowned in a swollen river in a town in Catanduanes.

The names of the casualties were not available as of Tuesday afternoon, except for the school teacher, who was identified as Romulo Angulo, 57.

Angulo drowned on Monday while crossing the Sagrada River in Bagamanoc, Catanduanes, a remote town 65 km from the Catanduanes capital, Virac.

Angulo was fording the river to bring food to his stranded daughter, also a teacher at Minaili Elementary School, Bagamanoc Mayor Odilon Pascua said in a phone interview.

The entire Albay, a large part of the two Camarines provinces and parts of Catanduanes and Sorsogon were without electricity starting at dawn Tuesday.

Authorities in Albay said heavy rains and floods affected more than 100,000 families in the province. At least half of them were displaced by floods, landslides and lahar flows, they said.

Five people were missing in Bicol while a 12-year-old girl was missing in Quezon province, relief agencies said. The girl’s playmate was rescued later in the surging Dumacaa River.

In Manila, the Philippine Atmospheric, Geophysical and Astronomical Services Administration (Pagasa) raised Signal No. 1 in 23 Luzon provinces as Juaning raged closer to the country.

Juaning was expected to make landfall in Quezon early today (Wednesday), between 2 and 4 a.m. according to weather division chief Robert Sawi. It would be closest to Metro Manila at noon Wednesday.

Sawi also said Juaning had a diameter of 500 km that covered almost the whole of Southern and Central Luzon.

Juaning was forecast to bring 25 to 50 millimeters of rain in a six-hour period in Luzon, he added.

“We need rain to fill up our dams and irrigate our farms, but too much rainfall could damage our ricelands in northern Luzon,” he said.

At least 22 domestic flights were cancelled due to heavy rain and near zero visibility.

The Maharlika Highway in Albay, the province’s main transport artery, was unpassable due to floods. Roads in the towns of Tabaco, Daraga, Polangui and Oas were also unpassable.

Floods also cut off roads in northern Catanduanes. Power was cut off in the capital Virac.

Cedric Daep, head of the Albay Public Safey and Emergency Management Office, said the provincial government had asked the military and police to send trucks and other vehicles that could be used for evacuation.

Officials in Camarines Norte were on high alert as the province braced for Juaning. Classes were also suspended in the province and government vehicles put on standby for rescue operations.

Camarines Norte is no stranger to calamities. In 1995, it was devastated by Typhoon Rosing.

In Quezon, 15 crewmen of a fishing boat that capsized off Polilio Island, were rescued. The 15 men were washed ashore on Balesin Island after strong waves battered their boat, authorities said.

In the Visayas, 31 passengers and crewmen of the boat Nene Linda were rescued in waters between Iloilo and Guimaras Island on Tuesday.

Many homes in Albay were damaged or destroyed in the floods.

The Department of Social Welfare (DSWD) prepared supplies of rice and other relief goods for distribution in Albay and Camarines Sur.

Social Welfare Secretary Corazon “Dinky” Soliman said the local offices of the DSWD were also ready with supplies of blankets and clothes.

The Department of Education (DepEd) suspended classes in Metro Manila and in all of Bicol on Tuesday.

Tuesday night, the DepEd suspended classes for Wednesday in the kindergarten, elementary and secondary levels in the National Capital Region and in Region 3.