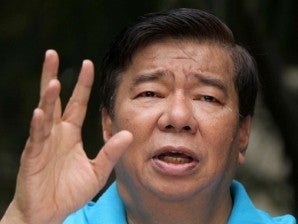 The medical community has thrown its support behind Sen. Franklin Drilon’s version of the sin tax bill, hailing it as a “good compromise” that would mean more tax revenues  for the health of indigent Filipinos and save more cigarette-smokers from death.

Drilon told 12 medical associations in a forum Thursday he would call on President Aquino to certify the sin tax measure as urgent.

The forum coincided with the release of a survey on teenage Filipino smokers that showed more than a quarter of them would kick the habit if the price of a cigarette stick was raised by  P10.

The medical groups, led by professors from the University of the Philippines-Philippine General Hospital (UP-PGH), pushed for the passage of Drilon’s draft of the bill, one of several versions of the controversial measure pending in the Senate and the House of Representatives.

The medical alliance vowed to take to the streets and follow the bill’s progress through its new website, bawasbisyobill.com, which aims to widen public awareness and track legislative work on the measure.

Crunching the numbers on the social cost of smoking, Dr. Antonio Dans, a UP medical professor, said 240 Filipinos were dying daily because of smoking-related diseases, particularly lung cancer.

The total healthcare costs of caring for and treating ailing smokers run up to  P188.8 billion a year, he said.

“We’ll never get this opportunity again to save 42,000 more lives in one fell swoop,” Dans said. “We will never get the chance to show that we are able to provide healthcare to Filipinos regardless of their ability to pay.”

Dans gave the estimate of lives that could be saved per year once Drilon’s version of the bill was passed, citing a projected decline in smoking prevalence.

Dans lambasted the version of the bill by Sen. Ralph Recto, who quit the Senate ways and means committee amid public uproar over his draft perceived to be “friendly” to the tobacco industry. Drilon is now interim chair of the committee.

Drilon’s version seeks to increase the tax on every pack of cigarette to P18.02 from the current P5.54, almost twice the rate in Recto’s version at P9.15.

Dans said Drilon’s version and the entailed higher per-stick pricing would prompt roughly 22 million Filipinos to quit the habit, more than twice the estimated 790,000 smokers expected to give up their vice if Recto’s draft was passed.

The Drilon bill would also save 66,000 Filipinos from smoking-related deaths per year, said Dans. Recto’s would save 24,000.

Drilon assured the medical community he would not give up on the bill despite the industry lobby.  “I will resist any effort to reduce taxes on cigarettes.  We believe this is the most effective way to save lives,” he said.

“This is a health bill more than a fiscal, revenue measure.  We cannot rest … halfway through the fight,” the senator added.

Drilon said enacting the bill would generate P13.3 billion in funds for the state health insurance agency PhilHealth, for the coverage of 5.2 million indigent Filipino families.

He allayed the fears of tobacco farmers that the bill would kill their livelihood.

Drilon said the market for raw tobacco produce was small: Tobacco manufacturers in the country only source 15 percent of their tobacco requirement from local farmers and import 85 percent from overseas.

The push for higher taxes on cigarettes is backed by the Asian Development Bank (ADB), which cited the Philippines as one of the countries that would suffer the biggest numbers of smoking-related deaths if there was no government intervention.

In its report,  the ADB said the Philippines, together with China, India, Thailand and Vietnam, were seen to eventually register 267 million smoking-related deaths in the short-to-long term if current smoking trends continued.

The ADB said a 70- to 122-percent increase in cigarette taxes in the five countries would cut the number of smokers by 67 million and reduce smoking-related deaths by more than 27 million.

Also on Thursday, former Health Secretaries Esperanza Cabral and Jaime Galvez Tan proposed that at least P1 billion in revenue to be generated from sin taxes should be earmarked for health promotion in the Philippines.

According to the World Health Organization (WHO), health promotion is the process of enabling people to increase control over their personal well-being and encouraging them to make healthier lifestyle choices.

“Our leaders must recognize the need for health promotion, especially now, when noncommunicable diseases greatly threaten the health of our nation. If we do not address this now, then we are sure to regret it in the future,” Cabral said.

Noncommunicable diseases (NCDs) include cancer, lung disease, and heart disease. Studies have shown six out of 10 deaths in the Philippines are due to NCDs.

“Due to poor lifestyle choices, most Filipinos have risk factors that make them more prone to NCDs,” Tan said.

A WHO study showed 90 percent of all Filipinos have at least one risk factor that causes noncommunicable diseases.

The former  health secretaries emphasized that disease prevention measures, such as health promotion, should be prioritized just as much as curative measures.

“If we only focus on treating sick people, then those who are healthy today will eventually succumb to sickness in the future,” Tan said.

He and Cabral said the government should allot P1 billion from sin tax revenues to ensure all Filipinos have access to healthier options.

But a group of businessmen and professionals warned the government would lose—and not generate—more revenues if it slapped higher taxes on cigarettes.

The Caucus for Philippine Competitiveness (CPC) said a hike in cigarette taxes of as much as 1,000 percent, as proposed by some legislators, would steeply increase the prices of cigarettes produced by legitimate cigarette manufacturers and cause a shift in demand to cheap, smuggled cigarettes.

CPC, a nongovernment organization, said the government would lose revenues as a consequence, with legitimate businesses suffering reduced sales.

It said the promise of higher government revenues from increasing the sin taxes would hold true only during the first year of implementation of the tax hike. Starting the second year, the decline in tax collection would be felt, it warned.

A problem to confront consumers is the government may be forced to compensate for the lost revenues from cigarette taxes by increasing other taxes, such as the income tax, or imposing new ones, the group said.

“If health and finance officials succeed with the legislation of 1,000 percent hikes, sin tax revenues would contract by the second year of implementation like it did in Singapore,” CPC chair Mike Lopez said in the statement.