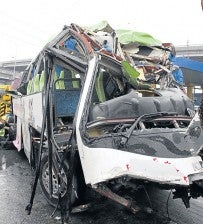 FALL FROM SKYWAY A damaged passenger bus lies on the service road in Sucat, Parañaque City, after it crashed and plunged some 40 feet from the Skyway on Tuesday killing the driver and two passengers. NIÑO JESUS ORBETA

A passenger bus which fell off the Skyway and onto the West Service Road in Parañaque City (see related story below) and a seven-vehicle pileup in the Edsa Ayala tunnel in Makati City were among the 23 accidents recorded by the Metropolitan Manila Development Authority (MMDA) between 6 a.m. and 2 p.m.

MMDA Chair Francis Tolentino described the figure as unusually high based on the agency’s experience.

“Motorists have to be careful on the roads, especially during the rainy season. The roads are slippery and there are times road visibility is poor,” he told the Inquirer on the phone.

At around 11 a.m., a Dimple Star Transit bus with five passengers which was traveling on Skyway crashed into the steel railings and fell on the West Service Road in Sucat, Parañaque City.

Three of the passengers and the bus conductor survived but the driver and the remaining two passengers died at Parañaque Medical Center due to their severe injuries.

Jonathan Alebar, 33, the bus conductor, told the Inquirer that it was raining hard when the accident occurred.

He said the Alabang-bound bus was traveling at just 60 kilometers per hour when the sky darkened and the vehicle was hit by a sudden gust of wind.

Alebar, who suffered cuts on his left arm and facial scratches, said the bus swayed to the right and fell off the Skyway.

The impact hurled him out of the bus and when he came to, he looked for the driver, Joven Justol.

“I was worried about him because he could no longer talk when I told him to fight for his life. I was the only one [in the bus] who was well enough to stand and check on the victims,” he said.

Alebar brushed aside claims that the driver was drunk or that he had been speeding before the accident.

Justol, a resident of Novaliches, Quezon City, died at 12:20 p.m. followed by two of the passengers identified as Anthony Abarra, 21; and Lorenzo Gabo, a marine engineer from Agusan del Sur. 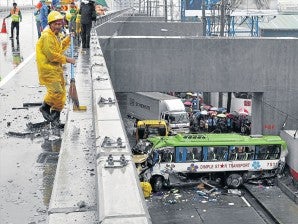 On the other hand, the rest of the passengers—Rene Mendez, Frisco Geraldo and Katherine Josol—were reported to be in stable condition at South Superhighway Medical Center where they were treated for cuts in their arms and legs.

Geronimo Ambay, a representative of Dimple Star, said the company would shoulder all the victims’ expenses. He added that he had been instructed by management to give each passenger the initial amount of P30,000.

Police investigator SPO2 Cid Dumlao said that a case of reckless imprudence resulting in damage to property and multiple physical injuries would be filed against the bus company.

Meanwhile, an accident involving seven vehicles snarled traffic for hours on Edsa,  compounding the woes of motorists who also had to cope with poor visibility and flooded streets.

Fortunately, none of the drivers involved in the smashup suffered serious injuries.

Paul Andrew, a Briton who lives in Caloocan City, sustained a cut in the head while three more suffered bruises.

Chief traffic investigator SPO2 Sabado Pujeda said the accident occurred at around 11 a.m. and started when an Elavil bus (EVP 598) crashed into Andrew’s Honda CRV in the Edsa Ayala tunnel on the southbound lane of Edsa.

The bus driver, Don Cañaveral, 36, said he was traveling at  “moderate speed” when the vehicle in front of him suddenly stopped. He added that he stepped on the brakes but it was too late to avoid crashing into the CRV which then slammed into a Jeep Commander and a Toyota Revo.

The two vehicles then skidded sideways and hit a van and an unidentified vehicle which did not have a license plate.

The Revo then went on to hit a provincial bus bound for Leyte which had stopped abruptly.

The driver of the bus, Victor Aboganda, 50, said a motorcycle-riding man had flagged him down and he slowed down because he thought he had committed a traffic violation.

Another investigator, SPO1 Diosdado Singun Jr., said he might ask the MMDA  for footage recorded by closed circuit television cameras on Edsa to verify Aboganda’s account.

“If it’s true, such escorts are illegal,” the officer said.

Aboganda added that the number of vehicles in the convoy was “more than 10 but less than 20.”

At the moment, investigator Pujeda said it appeared that the other bus driver, Cañaveral, was responsible for the multiple collision although he said this still had to be verified because their investigation into the accident was still ongoing.