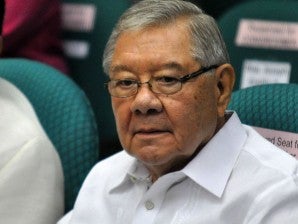 In a text message, Belmonte said that there was “no basis” for a report which tagged Ochoa as the official behind efforts to halt developments on the FOI Bill.

The committee on public information at the House of Representatives on Tuesday failed to put the FOI Bill to a vote.

Eastern Samar Representative Ben Evardone, chairman of the panel, also denied that Ochoa sought him out to delay or put a stop to the FOI’s approval.

“I vehemently deny the report that ES Ochoa lobbied against the passage of the FOI. He did not talk to me about the FOI when I met him during the budget deliberations of DILG and Office of the President,” he told reporters in a text message.

He pointed out that aside from recommendations on the FOI given by Malacanang to the public information panel, he had “no other communication” with Ochoa or other officials from the Malacanang.