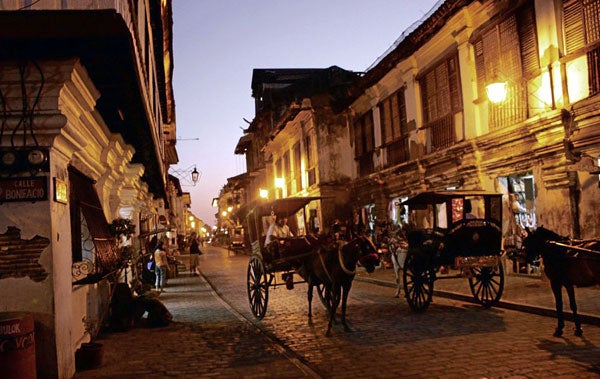 THE HERITAGE VILLAGE in Vigan City remains busy at night
as tourists enjoy walking on its cobblestone streets and ride in calesa (horse-drawn carriages) that ply the city famous for its rich culture and Spanish-era mansions. LEONCIO BALBIN JR.

On such theme as cultural tourism for community development, they kept their messages simple and meaningful.

“People like seeing people,” was the first thought that Susan Millar shared with 354 people in Vigan City last week. They filled the conference hall of the Ilocos Sur capitol, venue of the international conference organized by the International Council on Monuments and Sites (Icomos) Philippines and Icomos International Committee on Cultural Tourism (ICTC), which Millar heads.

Sydney-based architect and heritage consultant Graham Brooks provided a tool: “Artisans don’t need to be saved. They need to be empowered.”

Nuggets of wisdom or points to ponder on, distilled from years of advocating the preservation of world heritage as part of the advance of humanity, were shared during the two-day conference.

Filipinos made full use of the breaks, engaging some 50 Icomos members, from here and abroad, in talks on guidelines and concepts on heritage preservation.

Icomos, said to be the only global nongovernment organization of its kind, also held its annual meeting in the Philippines for the first time in time for the 40th year of the World Heritage Convention.

Vigan City was chosen as venue because after being inscribed in the United Nations Educational, Scientific and Cultural Organization’s list of World Heritage sites in 1999, its cultural tourism has thrived and has been sustained by the communities, said architect Augusto Villalon, president of Icomos Philippines.

What largely mattered, he said, was the infusion of new ideas on how to make cultural tourism work for the communities.

Millar said the destination approach requires a “fuller commitment to the protection of heritage values by the wider community—local residents and visitors.”

“Well-designed and well-marketed souvenirs have the ability to elevate a visit from a simple tourism commodity to another level of understanding and interaction with the host community,” Brooks said.

In making the Grand Trunk Road, on where empires and civilizations in India were said to have flourished and floundered, conservation architect Gurmeet Rai said the local community is being made the “active custodian of the heritage and participates in its protection, conservation and management.”

“The lasting benefits are not only the preservation of heritage sites and the economic and education benefits they provide from tourism, but the long-term psychological healing and relationships that develop,” she wrote in a paper read in the conference.

The Ramon Aboitiz Foundation (RAF) popularizes cultural heritage for education and tourism through the Gabi sa Kabilin or a night museum in Cebu City. Held every last Friday of May, it “connects communities with heritage advocates and heritage institutions to cultivate pride of place and at the same time stimulate economic activity/tourism in the heritage sector,” said RAF Executive Director Jocelyn Gerra.

Communities with literature can be destinations for cultural tourism, said Icomos senior member Kwangsik Kim, citing the Hyoseok cultural festival in Bongpyeong in Korea’s Pyeongchang county, which will host the Winter Olympics in 2018, and the television drama on the 16-volume story, “Land.”

The cultural tourists of the future in the Asia-Pacific region are “seeking more opportunities for personal growth and deeper cultural experiences during their trips than those who travel with their families or on a package tour,” said Prof. Hilary du Cros.

The rice terraces in Cordillera were the first agricultural landscape inscribed in the World Heritage List in 1995. At least 22 more cultural landscapes have made it to the list and sustaining these meant linking agricultural and livestock rearing practices with communities, said Prof. Celia Martinez of the University of Granada in Spain.

Getting it to the World Heritage List brings enormous economic impact but it may also “generate pride and social link, and benefits on the term to local communities, as well as to heritage itself,” said Michele Prats, Icomos France vice president.