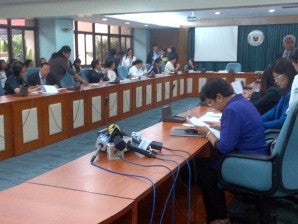 MANILA, Philippines – Attempts to delay the passage of the Freedom of Information bill became evident Tuesday when deliberations were channelled to what should be the national sign language at the House of Representatives.

Instead of having hand gestures pertaining to letters as with the American sign language, Bayan Muna Partylist Representative Teddy Casino argued that what made Filipino sign language better was that it was based on “signs and not words.”

Nueva Ecija Representative Rodolfo Antonino said that if FSL was imposed on local media outfits, “they may lose their foreign audience.”

Zambales Representative Mitos Magsaysay, however, saw the issue as one on “the interpretation of [the term] Filipino sign language” and not on the type of sign language itself.

In the middle of the heated debate, members of the audience kept mumbling “okay na yan. Tama na yan [It’s okay. Enough]” as they were impatient for the panel to move to discussions on the FOI Bill.

Lawmakers eventually voted against deleting the term “Filipino” from the proposed measures.

Read Next
Sotto: ‘How will I apologize for plagiarism when I never plagiarised?’
EDITORS' PICK
Harnessing technology for quality education
Killing of 2 activists hours before SONA condemned
Connect to PH’s fastest network with new Signature Plan Lite at only P599 per month
Tips for a cheerful life
Nesthy Petecio assured of Olympics bronze, ousts Colombian foe
Nesthy Petecio ‘blessed’ as Olympic gold quest continues
MOST READ
Nesthy Petecio assured of Olympics bronze, ousts Colombian foe
Isko for 2022? Manila mayor takes a swipe at Duterte on live broadcast
Why is Taiwan not called Taiwan at the Olympics?
Pagasa: More monsoon rain in NCR, Luzon; fair weather over Visayas, Mindanao
Don't miss out on the latest news and information.