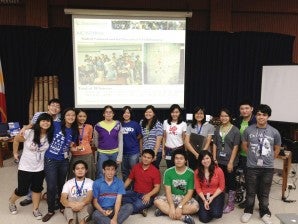 To turn rain into drinking water, get a solar panel to capture the sun’s energy and charge a car battery to operate an ultraviolet lamp and a ceramic filter to clean the water.

“With the battery, there is no need for [additional] electric power to make the system work,” says Cabacungan.

To view farmlands, forests and disaster sites from the air, use a miniature plane or helicopter with a camera. Skyeye is an unmanned aerial vehicle made by Matthew Cua, Roy Bayot, Happy Alampay and Vinni Canos.

With the support of Mayor Leonardo Javier, Skyeye studies areas in his municipality of Javier, Leyte. Soon, Skyeye will help the Department of Science and Technology evaluate coconut watersheds in Marikina River and the World Food Program map mangrove forests in Cagayan Valley.

“Mangroves are useful in disaster-prone areas and, with Skyeye, we can see which places need to be reforested,” says Cua, AIC’s managing director.

To build the “greenest vehicle in the world,” team up with Gawad Kalinga to build a lightweight bamboo bike that runs 30 kilometers on lithium ion battery and meets European environmental standards. Hopefully, the bike will be available soon in the market.

To manage wastewater with no carbon footprint, use the papyrus plant to filter sewage. Further disinfect it with activated charcoal, silica sand, gravel and rocks. The system developed by Granada and Abigail Favis results in water that the Philippine Institute for Pure and Applied Chemistry deems to have fewer bacteria and, after further ultraviolet treatment, good for irrigation. Ateneo de Manila University’s Marian Garden and Matteo Ricci Study Hall have the system installed. 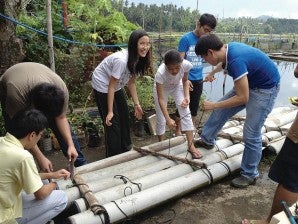 TO MONITOR fishkill in Lake Palakpakin, a bamboo raft is built.

Tangonan, who worked in Hughes Research Laboratories in the United States and was featured in my book “Ten Outstanding Filipino Scientists,” is a consummate innovator. When he returned to the Ateneo, he infected scientists with his enthusiasm for innovation.

Initially, Tangonan worked mostly with faculty and students in the electronics and communications engineering department. When the AIC opened in 2009, people from other departments—computer science, management information systems, chemistry, environmental science, legal management, development studies, fine arts in information design, among others—joined in.

“Our process of innovation, research and commercialization is simple,” says Tangonan. “We look for good ideas from ourselves, from our partners and from around the world for products, services and models. We would then spend a year on research and development to create prototypes and proof of concepts. As an open innovation center, we show these to our close partners and get feedback, buy-in and investment. We work and work until something gels or vector into another direction that has more promise.”

“Innovation takes a certain kind of silliness or craziness and intellectual combat, which are not normal in our culture,” says Cua.  “But we need high-quality people who believe in and breathe innovation. A school can pour millions of pesos into developing a place, getting pretty labs, but without real innovators, it would get nowhere…

“We create an open and fun atmosphere. Our door is always open. Our only rules are: Be respectful of everyone’s work, do not break anyone’s trust, be prepared, ask questions. Everyone starts as an amateur, and there is no such thing as a dumb question, though if you did not do your homework, shame on you.”

Erich Villegas and Daniel Legazo launched Tele-rehab (a blend of Wii and Kinect technologies), with the University of the East Ramon Magsaysay Memorial Medical Center, to help the physical rehabilitation of stroke patients.

“Stroke patients often need therapy, but they may stop after a couple of weeks because they don’t see results,” says Cua. “With Tele-rehab, we can track their progress and give them feedback.”

Chemistry department chair Nestor Valera, together with Abigail Chen, Merridith Gaw and Therese Tuballa, invented No Trace spray to remove dirt from LCDs or glass screens. Biodegradable and nontoxic, it is even “safe enough to drink,” says Chen.

No Trace is available at the Ateneo Loyola Schools Bookstore.

After monitoring the fishkill in Lake Palakpakin, one of Laguna’s Seven Lakes, AIC built machines to increase oxygen content in the lake.

“We are doing the science,” says Cua, “but we are also working with social scientists to assess the developmental profile of the lakes.”   The project has attracted the interest of other countries.

Marek Sison, Dayanara Simon, Christine Tero, Matt Santa Maria and Aia Sia created Viva la Laguna, a simulation-role playing game to monitor the well-being of the lakes. “Most people seem not to care,” they say, “but perhaps only because they don’t know how to start. With this game, anyone can save a lake.”

Read Next
Washed out Iligan school hopes to find a home again
EDITORS' PICK
TECNO Mobile sparks up summer with fun livestreams, great prizes
ING Pay is the safe and reliable way to pay – here’s why
House-to-house COVID-19 testing pressed to get ‘true’ PH state
PGH seeks more plasma donors as it loses 5 patients to COVID-19 daily
Despite ‘red-tagging,’ community pantries rise to 350, says advocate
Smart is fastest 5G Network in PH – Ookla
MOST READ
PH military pouring naval, air assets near site of Chinese incursions in WPS
US adds 116 countries to its ‘Do Not Travel’ advisory list
PH-Canada labor agreement coming soon – DOLE
Ganging up on a good thing
Don't miss out on the latest news and information.