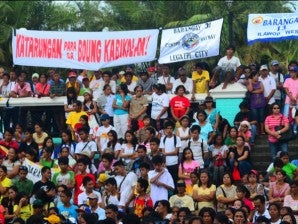 Supporters of Ako Bicol gather at the Peñaranda Park in Legazpi City to show their support to the party list, which was earlier disqualified by the Commission on Elections to participate in the May 2013 elections.INQUIRER FILE PHOTO

Retired Supreme Court justice Vicente Mendoza, lead counsel of the AKB,  has filed in behalf of the Bicol party-list a petition with the high court seeking for a temporary restraining order or writ of injunction against the Comelec’s order on October 10 striking out AKB from the list of accredited party-list groups for the 2013 mid-term elections.

Mendoza said that with the Comelec scheduled to finalize its list of candidates from December 2 to 31 this year and the ballot to be formatted between January 20 and April 23 next year, “the onset of several public holidays in the coming months, including the looming Christmas break inserts added urgency since said holidays lessen the time to resolve these issues, effectively depriving petitioner AKB of a fair chance to prepare for a nationwide campaign,” Mendoza said.

The Supreme Court is scheduled to resume its en banc session this week with AKB’s petition part of its agenda on Tuesday. The Supreme Court will go on a Christmas break next month and will return on January 7 or two weeks before the start of the printing of ballots.

Mendoza said that the AKB should be allowed to mount a national campaign during the allotted period especially if the SC would rule against the Comelec and uphold the party-list group’s accreditation.