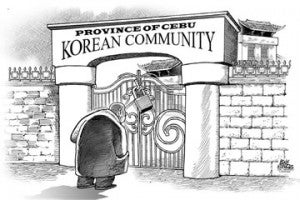 AFter Thursday’s dialogue between the Police Regional Office and the Korean community in Cebu, we hope that it would do more than allay fears of both Koreans and Cebuanos alike about violent crimes involving conflicts between Koreans.

Some good proposals came out of the dialogue.

For starters, it called for the training of police officers in the Korean language to surmount the language barrier and the appointment of a liason officer from the Korean community.

It also called for an orientation of visiting South Koreans on Philippine culture and laws.

How to conduct this effectively with 35,000 South Koreans scheduled to visit Cebu for an educational tour starting this month until December is already a big challenge.

The South Korean Ambassador to the Philippines Lee Hyuk is in Cebu for courtesty calls with local government officials.

His itinerary will surely invovle updates about the wellbeing of his countrymen, who are the biggest foreign tourist group in Cebu and the rest of the country.

Among the major investments of South Korea in the country are the 200-megawatt coal-fired plants in Naga of the Korean Electric Power Company and the Imperial Palace in Mactan not to mention the mushrooming bars, restaurants, groceries and other tourism enterprises in Cebu.

We hope the tensions that have errupted in Cebu within a week of criminal episodes involving Koreans don’t not signal the presence of crime syndicates of the same weight as the Italian and Japanese mob.

Cebu is a vibrant tourist destination and investment site, a playground and business haven that should be treated with respect.

It doesn’t need to import troublemakers even if they bring in valuable tourist dollars or won.

We hope the recent dialogue opens up good lines of communication between the police and the Korean community whose growing numbers in Cebu means they are only too happy to tour, invest and lead productive lives in the province.